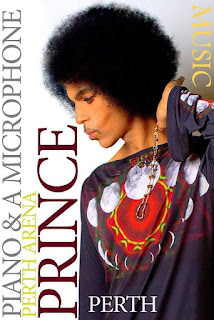 I've been a huge Prince fan for something like 30 years but I've never seen him play live. A state of affairs I'm glad to say has been rectified by attending this superb concert at the Perth Arena.


Four decades of performing showed in sublime piano playing, outstanding showmanship, and a voice that ranges from a sultry baritone to a still soaring falsetto that gives you goosebumps.

He added a personal element talking about how he wanted to look like his mother and sound like his father but it was the sense of humour and sheer joy of performing that were memorable.

Prince sure knows how to work an audience and he responded to the energy he drew from the crowd. There were several moments people leaped to their feet in applause or to dance. No one does funky like Prince. Or sexy.

Then there's that formidable catalogue of songs. The hits were present from Kiss to Raspberry Beret; Cream to Purple Rain. Indeed he ranged far and wide over his discography with early numbers such as I Feel For You, Dirty Mind and a rollicking Controversy all the way to a couple of tracks off his latest album. The CD of which, incidentally, was handed out as we were leaving!

Highlights for me: an emotional The Beautiful Ones where that falsetto was devastating; an extended version of Thieves in the Temple that included It; emphatically reclaiming Nothing Compares 2 U; one of my all-time favourites Little Red Corvette; and a flat out funky Kiss. But I could go on.

His biggest success Purple Rain was well serviced with the title track, The Beautiful Ones, Take Me With U, and the concert opener I Would Die 4 U. Sign o' the Times, arguably his best album, included It, The Ballad of Dorothy Parker, and Starfish & Coffee.

A brilliant night from a brilliant performer and musician par excellence.
Posted by Richard Hyde at 12:14