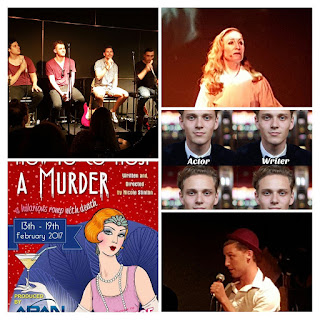 Who knew that Fringe World had a time machine and that it was located at the Ellington Jazz Club?

This tribute to the formidable career of legend Marlene Dietrich had class written all over it from Bodycoat's performance and 'severe chic' look to the superb accompaniment by Gabriel Fatin on piano to the images from Dietrich's films projectedon the rear wall.

Classic songs abound - Falling in Love Again, Just a Gigolo, Where Have All The Flowers Gone and Blue Velvet among others, beautifully sung by Bodycoat.

Highlights for me - the haunting White Grass; Fatin feeling it during One For My Baby and One For the Road; and the impish The Laziest Gal in Town.

Having recently seen a big touring production of Singin' in the Rain and the renewed interest in the original movie after the passing of Debbie Reynolds, I was primed for this show. I knew Donald O'Connor played Cosmo in the classic movie musical but little more.

This show fills in the blanks including O'Connor's first wife, military service, and his partnership with a talking mule called Francis. Then, of course, there is his portrayal as Cosmo which earned him a Golden Globe nomination and from where the famous 'Make 'Em Laugh' comes from.

Halcrow makes for a charismatic O'Connor with Radda an excellent comic foil whilst also accompanying on piano. I thought there might have been more dancing but the stage space at the Ellington is fiendishly tight.

The most impressive aspect of the show was the chemistry between Halcrow and Radda. They bounced off each other wonderfully especially recovering from the odd goof in amusing fashion.

Highlights include Halcrow's athletic routine of the title number and a surprise 'appearance' of a legendary Broadway performer.

An entertaining show that shines a light on a varied and interesting career.

Chris, Jason, Ben, and Cameron. Remember those names as the boy band gone bad goes global. Surnames are for one hit wonders not sure to be household names from Balga to Boise; Belize to Berlin.

This is a high energy, full on parody, raunchy as all get out explosion of boy band harmonies, dance moves, and unforgettable lyrics. Trust me, there are lyrics you will never forget.

It also showcases superb vocal work from the four WAAPA graduates who lampoon a musical sub-genre while singing the hell out of a mix of original and well known songs.

The choice to cover Boyz II Men's End of the Road early established the talent on display. This was far more than a simple pisstake. Other covers included Uptown Girl and Robbie Williams' Angels.

And didn't the audience love it. The reception was wholehearted and raucous.

A terrific show full of sass perfect for Fringe.

It is so exciting to witness a rare live performance of the original 'Northbridge, Northbridge' before some hack called Sinatra stole it and retooled the lyrics in honour of a sleepy hollow in the US.

Welcome to the 50s where brylcreem is king and Hairspray is a decade away. Where Robert Menzies is Prime Minister and political correctness is not even a glint in the eye of the most ardent SJW.

Jens Radda plays Hank Finatra, crooner, bigot, and all round cad; drink at the ready, lyrical putdown cocked and loaded. This is a high wire act of pointed satire - and by pointed I mean a shank in your ribcage - which will have you thinking, "did he really just say/sing that... and did I just laugh?"

Radda tackles gender politics, race, sexuality, and religion by distorting the lyrics of famous Sinatra songs and other standards with acerbic asides in between. That he can sing the hell out of instantly recognisable classics despite the lyrical mangling and has an inherent charm helps deliver the, at times, breathtakingly non PC content.

This will have you laughing and squirming in equal measure and as the promo's state, is definitely not for the easily offended. A gutsy show that will perhaps divide opinions but is fearless in shining a light on today's inherent inequalities by reflecting on the past.

I'm fast coming to the conclusion that the legendary Kander & Ebb are the soundtrack of this year's summer in Perth. Their timeless songs featured in A Hot Harlem Romp; Chicago opened recently in Kwinana to glowing reviews; and here they form the backbone of a loose narrative involving dancing dames, bumbling detectives, an effusive host and domineering club owner... with a murder of the star attraction. Everyone is implicated including the audience.

It's fun and frothy with audience interaction; some 15 musical theatre songs from Cabaret to Anything Goes and Chicago to Gypsy; colourful dancing girls; and a good-natured vibe.

The vocal talent was a little uneven and there were a few sequences that got away from the cast - notably Cell Block Tango and When You're Good To Mama - however the highlights included Lloyd Hopkins' Mister Cellophane and a funny twist on Lady Is A Tramp with a playful Hamish Briggs.

Briggs was a likeable host though the setup was somewhat repetitive until the missing star is confirmed as dead. Madeleine Shaw added acting chops as Audrey and worked well with particularly Hopkins' hen pecked and lovelorn policeman.

Ben Todd was good on piano as Bobby though it was at times a thankless task with some of the 'bigger numbers' begging for extra oomph. The revelation for me was Andrea Lim as Babydoll who sang well and added character to a ditzy role. The dancers brought glamour and energy with especially Nikita D'Souza catching the eye.

A pleasant romp that was well suited to The Ellington.

*originally published at facebook.com/perththeatrereviews
Posted by Richard Hyde at 22:10