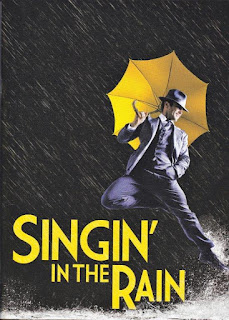 Great way to start the year taking Mum and Dad to see Singin' in the Rain at the Crown Theatre for their Christmas present.
The title number is spectacularly staged and performed at the end of the first act with the full cast reprising it at the end of the show. No need for a poncho as we were up high in the front row of the dress circle.

Gretel Scarlett was fabulous as Kathy Selden; Nadia Coote a scream as Lina Lamont; and our Don Lockwood, Rohan Browne I believe for today's matinee, was also very good. Jack Chambers, however, stole the show in a brilliant comic performance as Cosmo Brown. It was a thrill to also see recent WAAPA graduate Lyndon Watts crush his feature number Beautiful Girl. The orchestra was exceptional.

There were times it betrayed its movie origins and it took a while to build up a full head of steam but there were several great sequences with plenty of tap and the use of the screen for the 'talking pictures' was hilarious.

*originally published at facebook.com/perththeatrereviews
Posted by Richard Hyde at 15:26