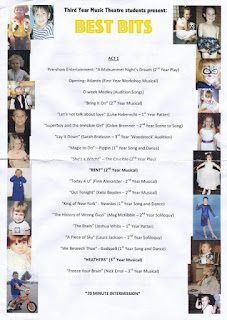 I haven't had as much fun in a theatre all year as I did with the graduating musical theatre students' final production before Showcase. I certainly haven't laughed as hard or as consistently at anything else, theatre or otherwise, for quite some time.

It is the usual custom for the graduating students to 'take the piss' out of their major 2nd and 3rd year productions during Best Bits. But this cohort has many gifted comic performers and as a collective they have impeccable timing and mischievous sense of humour. The send-ups of Rent, Heathers, 42nd Street, and Chicago were exceptional and there were even a few sly Bring It On references interspersed throughout the program. What is most impressive amongst the inspired satire is an understanding of the weaknesses in story or structure or character that is ripe for the picking.

It also reminds us of the many tremendous performances we've witnessed over the last two years. Most notably Kelsi Boyden in Rent; Monique Warren in Heathers; Mackenzie Dunn in 42 Street; and Boyden again with Jenna Curran in Chicago. Looking back it has been a strong slate of musicals with compelling female characters.

That's not to say the male students have been any less stellar as Finn Alexander (Today 4 U from Rent), Nick Errol (Freeze Your Brain from Heathers); and Luke Haberecht leading the charge in reminding us of the glorious tap dancing from 42 Street demonstrated.

This wasn't solely about making us laugh however. In a generous program that stretched over two hours there were plenty of opportunities for the students to show off their acting and singing skills. Dance, other than the tap from 42nd Street, wasn't as featured.

I liked that a lot of the songs had a lead-in requiring the performers to display their acting chops. The second half also included many more serious pieces to give a sense of emotional range. Indeed, it was an eclectic selection of songs from a remarkably varied smorgasbord of musicals. I was even teased with a snippet from Hamilton. Brief, all too brief! 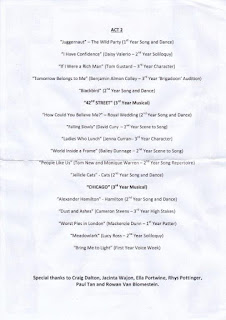 The two standout moments in this section were -

A beautiful rendition of Falling Slowly from Once by David Cuny (also on guitar) and Monique Warren (on piano). Extra points for difficulty as Cuny dealt with an unexpected broken guitar strap mid-song; and

A powerhouse vocal performance by Cameron Steens of Dust and Ashes from Natasha, Pierre & The Great Comet of 1812. The company adding backing vocals from the upper walkway elevated this further.

But there were so many highlights. To name a few:

The accent work of Meg McKibbin and Daisy Valerio in singing The History of Wrong Guys (Kinky Boots) and I Have Confidence (The Sound of Music) respectively.

Some inspired mania by Joshua White during The Brain from Young Frankenstein.

A deliciously phlegmy (not a term I hope to ever repeat!) If I Were A Rich Man from Fiddler on the Roof by Tom Gustard.

Benjamin Almon Colley bringing The Roundhouse Theatre to enthralled silence with Tomorrow Belongs To Me (Cabaret).

A lovely, authentic moment between Bailey Dunnage and Daisy Valerio as the former sang World Inside A Frame (Bridges of Madison County).

During the show costumes and props, once they were used, were placed in large wicker baskets and suitcases. The symbolic packing up after three long years. Final bows were quite emotional but the applause was enthusiastic and well earned.

See you on the other side in a few months time on stages here, over east, and who knows, maybe throughout the world. As Alexander Hamilton would say... just you wait...
Posted by Richard Hyde at 21:24