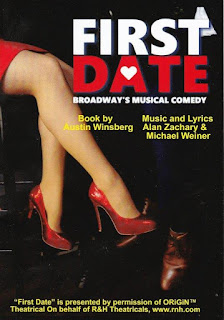 Director Lorna Mackie has a knack for bringing quirky, lesser known musicals such as 2014's The Great American Trailer Park Musical, 2015's Saucy Jack and the Space Vixens, and last year's Bad Girls to Perth's community theatre stages. First Date fits comfortably into that tradition; a funny look at the pitfalls, embarrassments, and epiphanies of the blind date. Not only that, Blak Yak being a theatre company without a permanent home often comes up with interesting alternative venues for their shows. In this case the Shenton Park Community Centre which proved quite the intimate locale. As an aside, it was amusing to see a portrait of a much younger Queen Elizabeth II hanging high above the onstage antics. Perhaps Her Majesty would have approved and hankered for a burger.

In essence this is a two-hander - guy meets girl at a restaurant on a first date - that is surrounded by a colourful group of real and imagined characters. In some ways it felt like a musical version of 90's sitcom Herman's Head with a comic sensibility that reminded me of Spamalot (Aaron is Jewish, Casey is decidedly not) and there was even a little Avenue Q thrown in with an unexpected 'cameo'.

Hutton is the awkward BDV (blind date virgin) Aaron and Skinner's 'serial dater' Casey is all sass and confidence. On the surface. Over the course of drinks and a meal they get to learn more about each other with the help of the wait staff, reincarnations of mothers and grandmas, intrusions by imagined best friends, sisters, ex-lovers, and, in the modern age, technology itself.

This gives plenty of opportunity for the ensemble to shine in several funny set-pieces but the success of the production rests on the interaction between Aaron and Casey. In this I was impressed with the acting of both Hutton and Skinner who bounced off each other nicely, displayed good comic timing, and gave layers of doubt and vulnerability to their characters amongst the observational comedy and, at times, sheer shtick. Not to mention sporting credible American accents and the ability to freeze mid-ingestion of a pickle.

It's an odd musical in that the songs are liberally shared around with the two leads not often given prominence. Skinner does get a featured moment with the first act closer Safer which she belts out to great effect. The five piece band was nestled alongside one wall right next to the audience. Indeed I was about a metre or so from the keyboards in my second row seat. The sound balance, on the whole, was very good and I was delighted that the drums were suitably muted. Several musicals staged at venues without a pit have been cruelled by overpowering drum work.

The wireless microphones were occasionally problematic with Nettle suffering the most in this regard. The poor pickup often left him singing unamplified but he showed great composure (and style) in soldiering on. The intimate nature of the venue meant that nothing too much was lost though the rapid-fire lyrics were sometimes difficult to follow.

Of the supporting cast Mitch Lawrence was excellent as Aaron's best friend Gabe with faux indignation and 'bro advice' turned to high. Helen Kerr plays the ex that Aaron must get over with "I'm too good for you" insouciance though it's her appearance as Google - yes, the search engine itself - that cracked me up during a role call of social media in The World Wide Web is Forever.

James Hynson is a scene stealer as The Waiter (and accomplice for the guest cameo) with his I'd Order Love kicking off the second act in style. Arianne Westcott-King had a twinkle about her as Casey's hectoring sister Lauren and was light on her feet with a little tap for good measure. Therese Cruise adds colour as a drunk at the bar and as the Jewish Grandmother from Hell in the Pythonesque The Girl For You while Jason Nettle plays the over-the-top gay friend Reggie with swagger.

As I often find with comedy musicals there is always a more serious or tender song that stands out from the frivolity and here it's Hutton and Kerr (as Aaron's mother) singing The Things I Never Said which was a standout. Hutton also has a featured moment in the second act with In Love With You.

Mackie at the start of the show encouraged the audience to hoot and holler throughout and it's that kind of musical. Funny, over-the-top, but with some perceptive insights into the dating game and strong performances all round. A fun night.
Posted by Richard Hyde at 18:37