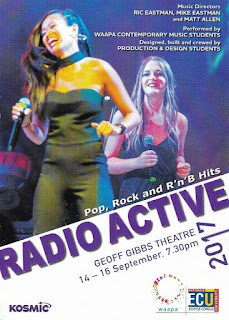 A terrific showcase for the vocal and musical talent amongst the now 200 strong cohort of contemporary music students. A fun time for the audience with an eclectic mix of songs from artists as varied as Toto to Beyonce. But an early highlight puts this all in context. Mia Matthiessen gave an excellent performance of the haunting Grandma's Hands by WAAPA alumna Meg Mac who is currently on a national tour with a hit album riding high in the iTunes charts. That's where the bar is set for these students - the possibility, one day, of a recording contract, album sales, hit singles, national tours and beyond. Heady stuff.

The musicianship of the band with rotating members was excellent. The vocal talent of the singers was uniformly outstanding. The stagecraft and how to work an audience, for many, is still a work in progress though there were a couple of natural performers in Zain Awan and Nicholette Chew. We also gained a brief insight into the personality of and inspiration for many of the singers as they introduced songs by their colleagues.

The first set was dominated by female vocalists with the second half leaning a little more to the male singers. Both sets were very good and I should mention the other students who make a night like this work - sound and lighting design, stage management, and the oft unsung arts managment front of house.


Beyonce's Halo by the remarkable Ritchell Lim with backing vocals by the WAAPA Gospel Choir.

A blistering rendition of Justin Timberlake's Cry Me A River by Zain Awan, both vocally and in sheer style.

A moving version of Sia's Chandelier by Lani Melrose who proved a crowd favourite with a down to earth enthusiasm for her craft and the evening.

The band rocked out to Detroit with Cameron Hayes prominent on lead guitar.

Katie Reid presented an extraordinary arrangement of Kate Bush's Running Up That Hill using her voice to lay down and layer a live 'backing track' of increasing complexity.

Nicholette Chew brought the pizazz and the pipes for Beyonce's Daddy's Lessons.

Radio Active is a rare synthesis of audience and performers' enjoyment and is a great couple of hours to spend with possibly tomorrow's stars, standards from the past, and hits from the present.