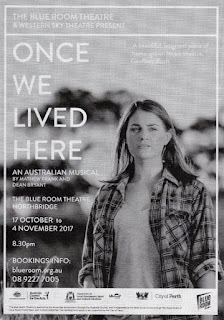 At the question and answer session following the Wednesday night performance Ryan Dawson (who plays Burke) and Megan Kozak (Lecy) indicated how difficult it is to sing with their natural Australian twang. They explained that most musicals are delivered with either an American or leastways neutral accent given the predominance of the US as a generator of this type of entertainment. How refreshing then to hear the unique sounds and vernacular of a homegrown Aussie musical no matter how difficult to maintain. There are lyrics and rhymes in Once We Lived Here that you wouldn’t hear created anywhere else in the world. For that alone this is a notable entry in the modern musical canon.

But the show is much more than that. The setting is utterly Australian – the country farm and its inhabitants battling the elements and themselves to eke out a living. In many ways it reminded me of the Spare Parts Puppet Theatre production simply called Farm from a couple of years ago. Life is bloody tough on the land. Families toil for generations in conditions that would make the average city dweller blanch. There is a fierce loyalty and bond to that land and to each other. Those loyalties are constantly tested and this is where we get to the heart of the musical.

Times are tough for the McPherson clan. The sheep farm is failing as is the health of the matriarch Claire (Sharon Kiely). Oldest daughter Amy (Taryn Ryan) has managed the farm ever since the death of her father some eight years earlier. Amy's siblings Lecy (Kozak) and Shaun (Joshua Firman) return to the property to be with Claire in what may be her final days. Former farmhand Burke (Dawson) also arrives at 'Emoh Ruo' though his motives are questioned by Amy. Hard earned truths and tragedy ensue as these five distinctly drawn characters interact in the furnace of the drought afflicted environment and competing memories of their shared history. Events of the past are revisited. Revelations made. Futures put in flux.

There is a truthfulness here that is commendable and while emotionally fraught, resonates with authenticity. There are no easy victories, no glib story beats. This heightens the joy we experience when these characters find even the smallest moment of happiness or deliver the briefest of smiles. The humour is distinctively Australian, at times laugh out loud hilarious, and a coping mechanism for the ever present harsh realities of country life.

Behind all this there is a spirit that infuses the musical that strikes me as quite special given it is counter-intuitive to what could be perceived as the general bleakness of the premise. It celebrates the strength and resilience of these characters and of those who choose to makes sacrifices, personal, professional and emotional, to work in the country. The love between siblings, and between a mother and her children, also rings out loud and clear. It's an impressive and ever present energy.

The Book, Music and Lyrics are by Matthew Frank and Dean Bryant who, as was remarked at the QandA, are country lads. The structure involves cutting between two timelines - the present and eight years early when a key event shaped who these people have become. I admit, I was a little disoriented when the first 'flashback' occurred but once I keyed into the device it was fine. In this I was aided by the lighting design and notable change in performances - Shaun, for example, is only 13 years old in the flashbacks.

I very much liked that Frank and Bryant found a simple yet creative way to deal with exposition in the early going as Lecy uses a handheld camcorder to capture her feelings on returning to the farm and to interview her siblings. It works because it reveals so much about Lecy, the materialistic girl who fled to the bright lights of the city. It also sets up the family dynamics as the others react to her posturing.

The music, beautifully played by the three piece band of (Musical Director) Joshua Haines on piano, Harry Love (guitar) and Luis Santos (double bass) in a room off to one side, is evocative and perfectly balanced with the vocals. So much texture is created here. The songs move the story forward and give us character insights aplenty. There's wonderful use of reprises to buttress emotional beats and recurring motifs for each character. Highlights include Ryan's Gotta Fix The Pump and As Far As The Eye Can See, Firman's haunting The Shearing Shed, and the moving The Leaves of Summer. Then there's the showstopper We Like It That Way that opens the second half in hysterical fashion. The cast sang superbly in the small space.

The dramatic heft of the Book means that the five performers have to show off some serious acting chops to go along with the impressive vocal talent. Foremost in this is Ryan who plays the practical, responsible daughter who, in many ways, is the replacement for the father that is so sorely missed. Ryan, one of the brightest stars in Perth's independent theatre scene, is simply terrific. There is a sequence where her character Amy finally lets all the bottled up emotions explode into life to quickly cut to a moment of happiness in the past which is just as swiftly undercut back in the present. The emotional range on display in a maybe 5-6 minute sequence is extraordinary.

By contrast, Kozak imbues younger sister Lecy with self-absorbed snark, and overt flirtatiousness when it comes to Burke. There is a certain desperation that bubbles under all this which becomes clearer in the second half. I'm a big fan of the off-beat comic energy Kozak brings to her performances and director Andrew Baker utilises it well here never letting it verge into caricature.

Joshua Firman does incredibly well with a tricky role - as the larrikin 13 year old who grows up to be the cruising-through-life Shaun with a gnawing sense of emptiness that festers. Firman has charm to burn so it's intriguing to see the restraint deployed in the present day sequences. He nails the cheeky, boyish enthusiasm of We Like It That Way and his work with Dawson in Guitar Lesson is excellent. Firman also has such a joyous singing style when let loose that is a pleasure to experience.

I had not come across Kiely or Dawson before but both round out an excellent cast. The former oozes maternal love and protection as Claire, never allowing the character to be defeated by either her illness or the past. It is a performance of great integrity and decency that anchors the production. Likewise, Dawson's Burke is a voice of reason amongst the emotional tumult. His character is a multi-faceted link to the McPherson children that sees him display fatherly concern towards Shaun; care for Lecy whilst rebuffing her advances; and notably a tenderness mixed with some tough love towards Amy. Again, he gives the character an aura of down to earth decency.

Props to Andrew Baker and fledgling company Western Sky Theatre for staging a two hour Aussie musical at The Blue Room and assembling such a talented cast, band and production team (shout outs to Rhiannon Walker for the rustic set design and costumes and Katrina Johnston for the lighting design). His intention is to mount productions that attract talent that is either from WA or trained here. If this opening salvo is any indication we are in for many excellent productions.
Posted by Richard Hyde at 00:51