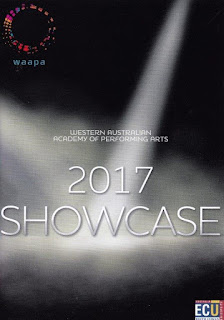 From Stephen Sondheim to David Mamet; Kander & Ebb to Peter Shaffer; Jason Robert Brown to Patrick Marber... you're unlikely to see as diverse a selection of acting excerpts and musical theatre numbers in two hours as you do at WAAPA's annual Showcase.

The W.A.A.P.A. Friends Of The Academy Showcase night is one of my favourite dates on the Perth theatre calendar as we get to say goodbye and celebrate the graduating musical theatre and acting students. I actually find it inspirational to witness the talent on display after three gruelling years of study and knowing that this marks the transition point from student to professional career.

As always that talent is across the board excellent. Congratulations to each and every one of you and all the best for your future endeavours and careers.

If I may offer a limited selection of favourites from the night... 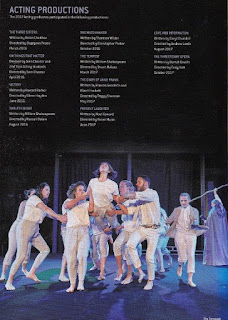 Spider-Man meets Catwoman in a very well written scene that highlighted the talents of Jack Scott and Laura McDonald with a nice array of emotions and underlying message. The writing was so perfectly suited to the actors' strengths I was delighted to discover Scott himself had written it.

An oft encountered pairing who have excellent onstage chemistry, Roy Joseph and Laura McDonald, in an excerpt from John Patrick Shanley's Danny and the Deep Blue Sea. I loved the physicality of the scene, their accent work, and the clear, crisp action changes. Many other scenes saw blocking where the actors were too far apart in key dramatic and/or emotional moments. Here, Joseph and McDonald were literally in each other's face which heightened the potency of the scene.

Sasha Simon's fierce performance playing opposite Mitchell Bourke in a scene from People, Places and Things by Duncan Macmillan. The focus is squarely on Simon as her character fights for help on her own terms. A smart decision therefore to have Bourke (who sets the table nicely) sitting angled away from the audience so that she was featured. 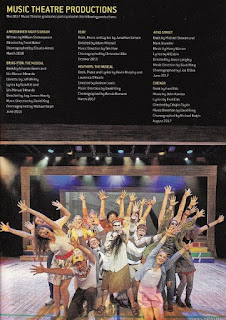 One of my absolute joys at the theatre is being surprised. That is often the case when someone who maybe hasn't been featured as much in the last couple of years blows you away in a jaw-on-the-floor moment. Here it was Chloe Bremner's performance of Behind These Walls which was superb.

Finn Alexander taking a song written for a female character - Sondheim's Losing My Mind from Follies - and making it his own in an exquisite performance. Brave choice, excellent execution that paid off in spades.

I have to also mention the musical accompaniment on piano from WAAPA's own Kohan van Sambeeck that was a non-stop, hour long tour de force.

In the days to come agents and managers and talent scouts and all sorts of other people will make decisons based on what they see at the final Showcase in Perth tomorrow night and then in Sydney and Melbourne. On the evidence of tonight I look forward to reading of agent signings and then casting announcements, both screen and stage, from here on in.
Posted by Richard Hyde at 23:55