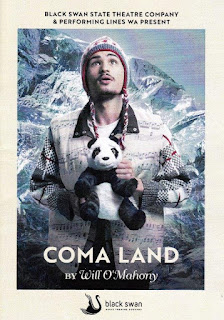 There is no doubt that local playwright (and director here) Will O'Mahony is a pre-eminent talent when it comes to crafting dialogue that dazzles, is fast-paced, dense and thoroughly entertaining. He loves having his actors deliver rat-a-tat barrages of facts and figures at high speed and his style favours repetition of key phrases and lists, point/counterpoint, as well as sly word play.

It is undeniably evident that O'Mahony loves words and language. What a gift that is for both his performers and the audience (though getting the rhythms and pace right must place all sorts of demands on the former).

Accompanying the sizzle is a sizeable 'chunk of gravity' though of the dramatic not physics kind. His plays explore interesting themes in an intriguing way, usually with a bitter-sweet emotional core. He has certainly served his 10,000 hour apprenticeship in mastering his writing gift.

The cast embrace the material - an exploration of loss, letting go, chasing perfection, and the expectations of parents and their children - within the framework of characters inhabiting this fantastical space while in a coma.

Morgan Owen is excellent playing a quintessential O'Mahony character in Penguin and generally handles the machine gun dialogue well. Working out the pauses for laughs will come with further performances. O'Mahony also knows when to slow down the verbal assault which emphasises the lovely contrasts as Owen modulates her delivery in volume, tone, and speed depending on dramatic or comedic beats.

Experienced comedian Ben Sutton adds brilliant timing and off-beat delivery to his unexpected character... as a panda. Yet it is the most off the wall character that delivers telling insight as revelations and epiphanies are made.

Kirsty Marillier's matter-of-fact delivery for the lamplighter character of Boon works well and she has a couple of notable scenes with Humphrey Bower who plays Penguin's Dad with paternal concern tinged with sadness.

Amy Mathews adds exuberance as Jinny, another coma patient who acts as almost a mediator between several of the other characters.

There was only one slight miss-step for mine - a cathartic emotional moment that is beautifully conveyed by Bower is drowned in a swell of unnecessary music. It jarred as the sound design for the rest of the play was far less intrusive.

The writing and the acting is top notch in an unexpected tale that is emotionally and thematically rich. I enjoyed it very much.

*originally published at facebook.com/perththeatrereviews
Posted by Richard Hyde at 18:25