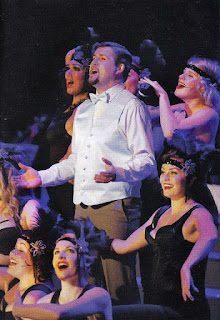 It's fair to say Kander & Ebb's classic is one of my favourite musicals - great songs, great music, sexy, slinky and sassy with that other musical theatre giant Bob Fosse adding his unmistakable stamp. It's a pleasure to report then that today's sold out matinee was a real treat and a fine start to Koorliny's community theatre season.

Now, despite, ahem, entreatments to get me back in the reviewing game, let me instead nominate some of my many highlights...

The orchestra added the sass and swagger and I was particularly impressed with elements you don't usually hear such as banjo and accordion. Props to Emily Gelineau on violin and a cracking brass section.

Elethea Sartorelli was excellent as Velma Kelly with two standout sequences in I Can't Do It Alone and When Velma Takes The Stand.

Helen Kerr came into her own vocally with My Own Best Friend and was the linchpin in several memorable sequences, particularly We Both Reached For The Gun and Me and My Baby.

David Wallace made for a slick and laid-back Billy Flynn with Razzle Dazzle another well staged sequence courtesy of choreographer Allen Blachford's work which was exemplary throughout.

Callan Kneale threatened to steal the show as Mary Sunshine and both Tate Bennett and Ruth Bennett caught the eye in various roles.

Finally, a highlight for followers of community theatre - Sartorelli and Rachel Monamy (a ballsy Mama Morton) - both recent Finley Award winners, sang the hell out of the duet Class.

Funny, sexy, with a roster of great songs the few remaining seats for next weekend will not last long.

*originally published at facebook.com/perththeatrereviews
Posted by Richard Hyde at 12:15