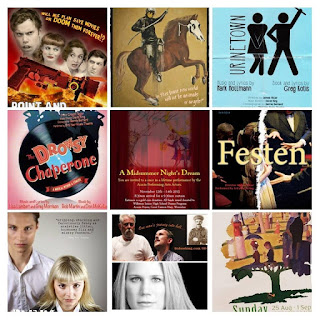 On reflection, these are the ten that have made a lasting impact.

An oustanding collection of musicals and plays that are personal touchstones for a variety of reasons but most of all for this, the thing I crave every time the lights go down:

In no particular order...

For mine, the best original production originating from WA in the last 7 years. A superb one act comedy musical.

Brilliantly written and acted, this brutal and provocative play left me gobsmacked, staged at the gritty PSAS in Fremantle.

I adored the satirical tone of this musical but it was the fierce choreography in the intimate confines of The Roundhouse Theatre that elevated this to memorable status.

Witty, gorgeous, laugh out loud funny, this was a dazzling musical that was a complete triumph for that year's graduating class.

A gut punch of a play that was a brutal watch but utterly engrossing as the majestic horror unfolded.

Featuring an outstanding young ensemble cast that demolished the set in the studio space at the Subiaco Arts Centre in a powerful and spirited performance.

Playwright Noel O'Neill may be better known for his comedy franchises but this is by far his best work. A devastating portrayal of a man traumatised by war.

A bravura performance as Ali Kennedy Scott played multiple characters with aplomb to tell the heartbreaking story of the Black Saturday bushfires from unexpected angles.

Made me cry. Went home and booked a ticket for the very next night. Cried again. Superb.
Posted by Richard Hyde at 15:57