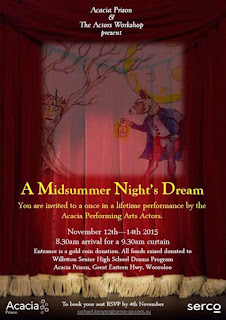 As I did so I saw sixteen actors arranged on a slightly staggered, three level stage.

I was at the theatre.

I was about to watch a play.

One of the most cherished comedies in the history of theatre:

In that moment of breathing, eyes closed, all that had come before melted away - the long drive, the uncertainty of what awaited me, the security protocols, the screening, the escorted walk through the grounds of Acacia Prison to a building that normally would be a workshop, the guards.

Yes, this was the most unusual of settings and circumstances.

I laughed. Oh, how I laughed. I was moved. I was transfixed. I was beyond impressed.

These men, almost all with no previous acting experience of any kind, flung themselves at this with energy, with style, with commitment, and with their own sense of humour and spirit. It was raw, it was powerful, and it was bloody well funny as all get out. The sly asides, the improvised lines, the odd fluff here and there, the occasional line read from the sidelines; all were incorporated with flair to burn. Above all, this was faithful to The Bard himself in a rollicking performance that drew a spontaneous standing ovation from family, friends, official visitors, and guards alike.

It was a simple stage with a painted backdrop that was flipped over to represent the woods after the initial Athenian scenes. You could see the actors and stagehands in the wings; the incomparable director Nichola Renton off to one side with script in hand giving surprisingly few line prompts. The makeup was done by one of the men in only 40 minutes before the show; the costumes were made by one of the staff. Musical inserts were a funny mix of everything from Chariots of Fire to the Benny Hill theme music. Other men were manning the sound and lighting desk at the back with something like a hundred cues. There were no airs and graces here. Everyone pitched in.

The performances were all astounding, from a mischievous Puck to a commanding Oberon (the actor, who also played Peter Quince, learnt the lines in 4 days!); to a terrific set of Mechanicals (Bottom’s death scene as Pyramus is something to behold!); and a quartet of young lovers that pursued, evaded, flirted, fought and finally found their true loves in rousing fashion. The men playing Hermia and Helena did so without a hint of self-consciousness and played up to the audience with a wink and a nod that was hilarious. Everyone embraced their part and what I thoroughly enjoyed was seeing their response to the laughter and appreciation they were receiving. That magic symbiotic relationship between a cast and an audience when things are firing on all cylinders.

The Question and Answer session shortly afterwards was just as impressive. The men spoke with passion and sincerity about what this opportunity meant to them and how they had incorporated so many elements into coping with life outside the performing arts programme. One likened the experience to walking through the closet into Narnia which was as apt an analogy as you’re likely to hear. Many talked about the support and encouragement within the group and how they were a family; how they trusted each other and felt safe. Perceptive comments about learning how to read body language and how to use that back in the blocks; about how their days performing were like being out of prison. The camaraderie within the group was palpable as was the sense of humour. It was moving to see the reaction of loved ones in the audience as well.

This is no luxury programme, no gimmick. The benefits were there for all to see and everyone involved needs to be applauded and encouraged to continue and expand this. As an actor in the audience remarked, the ability to put yourself in another person’s shoes and empathise with that character is an invaluable skill. The sense of teamwork and working together to achieve a common goal and support each other along the way is equally as important.

To mount a production, of Shakespeare no less, and pull it off with such success is a testament to the hard work and commitment of not only the men but the staff as well. Then there’s Nichola who spoke so passionately about working with and teaching this extraordinary cast. What an accomplishment!

This truly was a special day – memorable, moving, and funny.

Is it the most polished performance I’ll see this year? Not even close.

Did it the meet the requirement of theatre to entertain, to inspire, to move, and, for a comedy, to make me laugh?

You bet your arse it did.