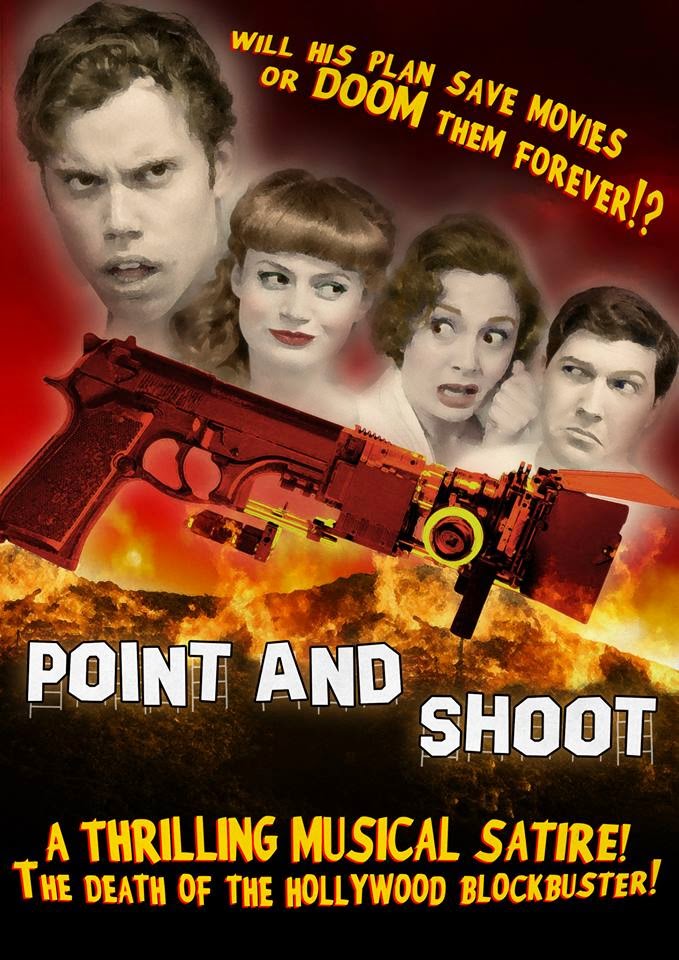 I finally saw my first show at Fringeworld for 2014 and what a show to see - the original musical 'Point & Shoot' by Perth's own Robert Woods and Tyler Jacob Jones, starring those two plus Erin Hutchinson and Tamara Woolrych.

This is a hilarious and pointed satire of Hollywood and the filmmaking business with a clever plot ("twist") and biting lyrics. The four actors play multiple roles and instruments and all are in fine voice. The transitions are seamless and this rockets along at a frenetic pace.

In, I think it was, 2042 the Hollywood blockbuster is but a memory having collapsed as a viable business in 2015. Now the Independents rule the roost - smart movies for smart people. But a screenwriter dreams of writing his own blockbuster like the good old days and is given the opportunity by a newly arrived actress who has the rights to a black and white television series from the 60s that may be the only property never optioned. What follows is a deliciously wicked romp with great songs and plenty of surprises.

At 75 minutes this moves so briskly and the audience I was with lapped it up. The talent on display is impressive - all four actors play everything from piano to saxophone to flute to cello while changing into several characters as the screenwriter and his muse battle the independents, greed, ambition and surprise antagonists at every turn. A screen is also used to show, firstly, the "original" television series; the teaser trailer of the blockbuster adaptation; and the climactic ending of the film itself.

Very happy that an extra show was put on (I can see why) and that I had a chance to see this. The couple I was sitting next to had been before and were laughing as hard as I was throughout.

Excellent production and perfect for Fringe. Extra points for the best rhyme ever with the word "verbatim"!
Posted by Richard Hyde at 16:02