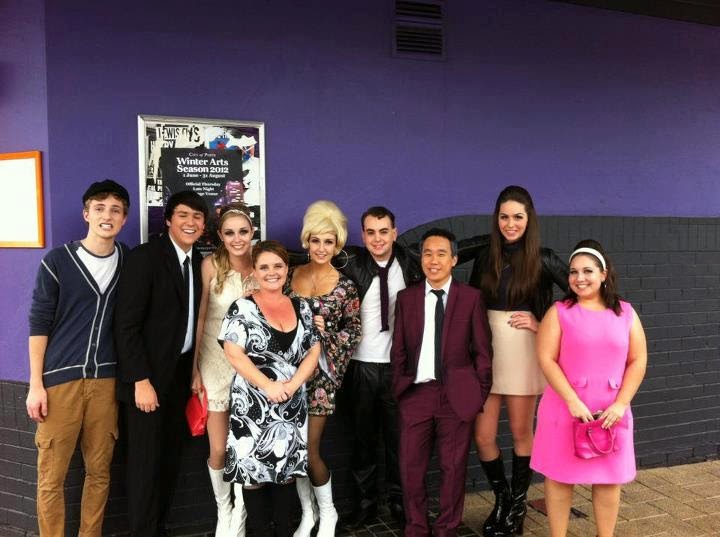 I had the pleasure of going to the opening of A Slice of Saturday Night at Ya Ya's in Northbridge on the weekend. This is a musical set in the Club A Go Go in 1964 where seven teenagers flirt and "navigate the rituals of teenage fashion, music, sexual mores and relationships" overseen by the owner Eric "Rubber-legs" De Vere.

It's flat out funny with excellent performances, great songs, and an off the charts energy level from the young cast. This is helped by the venue itself which is very intimate with the audience right up close to the action. There's even some impromptu audience participation (Eric likes to keep his club in good order!) and invitation to dance at one point. It was a great crowd that really was into the swing of things responding to the performers' infectious enthusiasm. And swing it does as a cheeky, vibrant, sixties mood is present throughout.

The performers were all suitably attired; the girls in short skirts with big hair and lashes; the guys all mod-Beatles wannabes. Indeed, a gentleman at my table who had seen The Cavern in Liverpool remarked that the space was remarkably similar.

The director Kelly Buckle makes full use of the venue with scenes taking place at the bar itself and characters congregating in the wings to chat, observe and give (singing) commentary on events happening on stage. There are also projected images of everything from The Beatles to Twiggy to really reinforce the iconic nature of the time period and sense of place. Even as you enter, the performers are in character and mingling with the audience which was a nice touch, cockney accents and all. Thank you 'Penny' for coming to sit and 'flirt' with me a little before the show!

Amongst the raucous plot of teenage boys looking to have some fun on a Saturday night and teenage girls looking for 'the right one' there is an underlying sweetness as well, particularly through the Rick and Sharon strand. Though that doesn't stop an hilarious pay-off to the bet that was set up right from the start that I will not spoil here! Suffice to say it had everyone howling with laughter.

This is good, fun entertainment with a cheeky nod and a wink back to a time full of great music, great fashion but still all about what do you do when you fancy someone on the other side of the bar on a Saturday night.