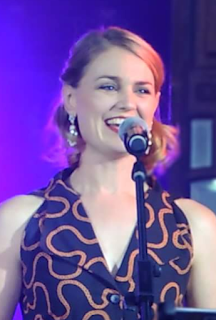 A farewell concert at the Ellington Jazz Club. New beginnings imminent in the UK. Perth loses one of its brightest independent theatre stars. London gains a unique talent, equally adept at belting out a song or acting the hell out of a scene, often whilst wielding her trademark ukulele.

Fittingly, the Ellington was full of friends, colleagues, and those who’ve come to appreciate Taryn’s contribution to the Perth theatre scene over the last few years.

Taryn first burst onto my radar in 2015 with the opening production of her graduating year at WAAPA, playing Little Sally in the musical Urinetown. But it was the mid-year spectacular at the Regal Theatre, Legally Blonde the Musical, where she cemented herself as one to watch with a show stealing performance as Paulette. As I wrote in my review, “I must confess I didn’t even recognise Taryn until checking the programme at interval. She was fantastic as Paulette bringing a different kind of kooky energy to match Elle’s eccentricities. Her showpiece number Ireland was a highlight as was her ‘bend and snap’…”

After graduating Taryn stayed in Perth to become a fixture of the city’s independent theatre output, particularly at The Blue Room and as part of Fringe World. Notable productions included the autobiographical The Naked Truth which was a quiet highlight of the 2016 Fringe World programme; another Fringe gem, When He Gets That Way, from 2017; and the musical Once We Lived Here at The Blue Room. The latter earned her a spot on my performers of the year in 2017 – “Taryn’s performance in Once We Lived Here grounded the whole production and, most impressively, she handled the emotional range required in the fractured timeline narrative expertly. It’s also a delight to hear Taryn sing after several non-musical roles this year.”

Other lauded productions that I unfortunately didn’t see include Porto (nominated for Best Supporting Actor (Female), PAWA Awards); Laika: A Staged Radio Play; and Tissue. Taryn also contributed her vocal and comedic skills to a reading of the hilarious first draft of Tyler Jacob Jones’ new musical, Summer of Our Lives, earlier this year. It’s an impressive resume.

But back to the farewell concert where Taryn wowed the audience with an eclectic mix of songs from “Tin-Pan Alley, classic Broadway, West End blockbusters and European cabaret, concept albums, pop/folk crossovers, and contemporary Australian musicals.” She sang beautifully with easy charm and heartfelt emotion over two sets of songs at the intimate Ellington Jazz Club. It was a splendid two hours showcasing Taryn’s immense talent and generosity. Despite declaring that we shouldn’t expect any rehearsed banter between songs there was spontaneous and self-deprecating humour throughout. One of the traits I admire about Taryn is that she is a such a genuine performer – there are no airs and graces or facades here. This builds an immediate bond between singer and audience that is tangible.

In this she was aided by an excellent band comprising Joe Louis Robinson on piano and vocals; Krista Low adding class and texture on the cello; a last-minute replacement on saxophone; Stephen Walker on bass/guitar; and Jasper Miller on drums. Robinson also provided new arrangements to many of the songs. The expert accompaniment was loose and relaxed which suited the evening to a tee.

Then there was the special guest vocalist; a member of Taryn’s graduating WAAPA class, powerhouse vocalist, Megan Kozak. Or ‘pipes’ as Taryn affectionately referred to her as. The camaraderie was there in spades as were the vocal fireworks as Megan nudged, okay, blasted us, into full tilt disco.

Highlights included Sondheim’s Getting Married Today; a stunning rendition of No One Else from Natasha, Pierre & the Great Comet of 1812 dedicated to local theatre writer-director Scott McArdle; the tandem pant-suited disco attack of No More Tears with Megan; crowd pleaser Mein Herr from Cabaret; an original song on ukulele with piano and cello accompaniment from The Naked Truth; culminating in a rousing finale of As Far As The Eye Can See that is such a wonderful moment in the Australian musical Once We Lived Here. A perfect end to a special evening.

There is no doubt Perth is losing a unique talent. But there was a sense that Taryn has outgrown us and that bigger and better things await as she chases her dreams on the other side of the world. On the evidence of her body of work to date and this memorable performance London will be gifted with an accomplished performer who will flourish in the spotlight.

Thank you for providing so many theatrical highlights both at WAAPA and in Perth’s independent theatre scene. It has been a singular pleasure to witness you act, sing, strum; move and entertain us.
Posted by Misadventures in WA Film at 22:01 No comments: