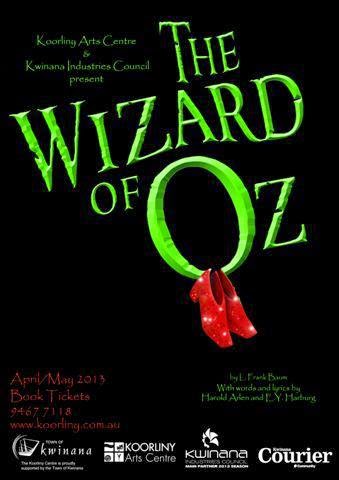 I travelled to Kwinana today to watch the matinee session of Koorliny Art Centre’s The Wizard of Oz. I had been very impressed with the last production I saw there (Jack the Ripper) and was interested to see how such an iconic story translated to the stage.

The lead role in this instance was played by Chloe Rollond (alternating with Georgia McGivern throughout the run) who notably sounded like Judy Garland in her speech patterns which was a nice touch. Chloe gave an assured performance as Dorothy which is no small task given she’s pretty much on stage the entire time and opens vocal proceedings with the timeless Over the Rainbow.

From what I remember of the classic movie, this production is almost identical story-wise. There is the reasonably long setup of all the major characters in Kansas – Dorothy, Aunty Em (Natalie Burbage), Uncle Henry (Jesse Angus), Ms Gultch (Cat Baxter), Professor Marvel (Geoff Leeder), and the three farmhands who will become Scarecrow (Drue Goodwin), Tinman (Brodie Masini) and the Lion (Craig Griffen); as well as the show stealing introduction of Toto Tudor as Toto the dog. With that name, clearly a role he was born to play!

The arrival of the tornado and its aftermath is handled effectively with the use of lighting and sound effects. Indeed, it was rather a sparse set with various forms of simple lighting effects used to recreate the world of Oz. The costuming was excellent and the Munchkins were a delight with a multitude of colourful young cast members.

The main quartet of Dorothy, Scarecrow, Tinman and Lion played off each other nicely and the musical highlight comes in the second act with Jitterbug. Cat Baxter is suitably menacing as the Wicked Witch of the West as are her flying monkeys and other minions. Natalie Burbage’s Glinda the Good Witch is kind of kooky as a deliberate counterpoint. Jesse Angus also brings an element of humour to the second act as the Emerald City guard.

It’s quite a long production but seemed to keep the attention of the large number of children in attendance for most of its length. The orchestra started slowly for mine but later found their rhythm. As there was no elaborate staging the scene transitions were economically handled and kept proceedings moving along suitably briskly.

Other highlights – Toto eagerly, with tail wagging, stealing the Professor’s sausage much to everyone’s delight; Drue Goodwin’s physical performance as the Scarecrow; Craig Griffen’s number King of the Forest; and the three Black Crows who felt like refugees from The Muppets but worked nicely.

It’s a classic tale well told with colour and verve. Directed by Brad Tudor with Musical Director Stephanie-Jane Lewendon-Lowe and Choreographer Allen Blachford.
Posted by Misadventures in WA Film at 15:30 No comments: