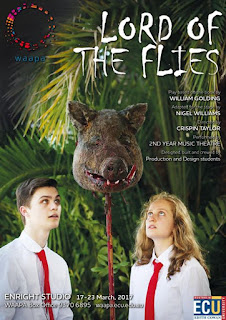 Straight off the bat, this is the most ambitious public debut production I have seen for a 2nd year MT class in the past four years. The first slot is always a play but usually incorporates song and dance in one form or another. Apart from some rudimentary choreography this is an unvarnished acting challenge dealing with a classic tale. Further complicated by the fact that the cast alternates each night after interval!

For the first half I saw the 10 member female cast and then 9 of the 10 male students after the break. Those familiar with the novel/tale will know which character is missing.

I can appreciate the experimental nature and the fact we get to see almost the entire group in one sitting. But it comes at a cost given the demands being made here.

Before we get to that, the design elements are strong from lighting and sound to the multi-level set that is made up of various elements such as compacted suitcases, parachute, sails, netting, airplane tyres and a couple of easter eggs for the keen of eye. Thank you Production Manager Dames Long for the brief inspection after the show. There is a reveal that is well disguised then executed and the ubiquitous pig's head is a substantial prop along with the other iconic item, the conch shell.

To the performances and this is where the MT students are stretched. I can recall either at an Open Day or WAAPA Tour seeing first year acting students doing an exercise where they played young children and then old people. This is how the opening sequences felt and well into the first half with over-exaggerated movement and voices, compounded by the female students playing young teenage males. It felt like an extended acting exercise.

This settled down after the killing of the pig when the plot takes on more serious undertones. Alessandra Tonkich increasingly comes to the fore as Jack upping the confrontational nature of the character. Imogen Howe and Stacey Thomsett also provide grunt as members of Jack's army of hunters.

Crystal Haig's performance of Piggy almost felt like she was channeling Matt Lucas and this muddled the tone for me coming across as caricature. Alexandra Cornish was a preppy and very English Ralph and I liked Prudence Daniel's and Emma Bradley's stillness as Simon and Percival respectively. Daniel didn't quite nail the difficult dual nature of her character, however, on confronting the 'Lord of the Flies'.

The second half is much shorter and it's fascinating to see the changeover to the male students who automatically and inevitably bring a more robust physical presence as matters spiral out of control and into open conflict. It would be fascinating to see how they handle the 'innocence' of the opening 'chapters' (I was ambivalent about the projection of chapter numbers and titles onto one of the sails). Andrew Coshan made an immediate impact as a striking Jack and Jarrod Griffiths fared better as Piggy.

The play ends with what felt like another acting exercise as the male students, their characters confronted by the enormity of what has occured, break down and start to weep. It's gutsy to hold on them for so long standing there slowing disintegrating before our eyes but then that's the point.

This production asked a hell of a lot of its cast and while the results were varied the sink or swim approach should serve them well in terms of the acting leg of their triple threat training.

*originally published at facebook.com/perththeatrereviews
Posted by Richard Hyde at 13:13 No comments: 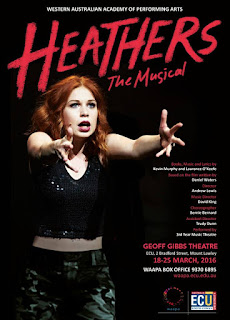 WAAPA is at its most adventurous in recent years with the choice of production in the first slot of the graduating MT class. Heathers proves to be no exception. Based on the bitingly satirical 1988 cult movie that starred Winona Ryder, Christian Slater, and Shannen Doherty, this captures the over-the-top tone perfectly while retaining the wry observations about teenage suicide, bullying, and depression with what was, at the time, almost a prescient foreshadowing of school massacres.

It's dark subject matter but the surface level presentation is infectious rock music with subversive lyrics; a riot of colour in staging, lighting, costuming, and rear screen projections; and exuberant choreography befitting the age of its characters. It's a fun show with energy and black humour to burn.

Monique Warren gives a star turn in the role made famous by Ryder. She sings superbly, looks fantastic, and I was impressed by her acting throughout. It is an eye-catching performance. Nick Errol is the square-jawed nemesis who nicely plays the arc from cool outsider to something far more deadly. His Our Love is God is a highlight.

Jenna Curran makes her mark as the Queen Biatch and ruling Heather until misfortune strikes. It's a delightfully venomous portrayal. The other two Heathers are played with swagger and style by Daisy Valerio who has a standout moment with the aching Lifeboat while Meg McKibbin assumes the red scrunchie of supreme bitchiness as the body count mounts.

As always, David King marshalls a fine orchestra in what is a cracking rock score and no less than Andrew Lewis himself directs this with great pace and playfulness.

A wildly entertaining start to this cohort's final year.


*originally published at facebook.com/perththeatrereviews
Posted by Richard Hyde at 12:59 No comments: 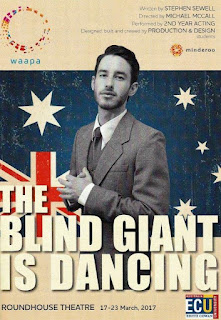 Hail and well met second year acting students! I look forward to getting to know your work invidually and as a collective over the next two years.

That all three strands swirled around the one character meant that Adam Marks who played Allen Fitzgerald had an enormous workload and acquitted himself well.

Here's the thing though. I simpy didn't like Stephen Sewell's writing. Characters felt more like positions than organic people; the political shenanigans were confusing with a late plot twist that was implausible; the dialogue was overly florid and didactic; and the interpersonal relationships verged into melodrama and didn't feel credible.

The play, at over two and a half hours, was also very long with those three strands only briefly intersecting to add any sort of dramatic heft. There were a lot of philosophical musings about love, religion, truth and freedom all coloured through a political lens that was hardly subtle.

Having said that, alongside Marks, I liked the work of Lily Stewart who played Fitzgerald's wife and was saddled with a lot of the clumsiest dialogue. The role demanded a range of emotions and while early scenes were a little awkward she handled herself with increasing confidence.

Others to impress were Michael Cameron as the main political antagonist; Jimi Rankin's initial scene played with scene chewing relish; Luke Smith's Ramon, Chile accent and all, though having the most socialist character be a Chilean exile was symptomatic of the overt nature of the piece; and Jarryd Dobson came into his own in the second half as the younger Fitzgerald brother. Thomas Jackson and Jessie Lancaster had their moments as the Fitzgerald parents.

The set was cleverly constructed with several compartments and sliding panels and it was a stylishly costumed show, the men's suits in particular.

It was an interesting introduction to this class who showed plenty of promise but ultimately the play didn't resonate for me.

*originally published at facebook.com/perththeatrereviews
Posted by Richard Hyde at 12:44 No comments: 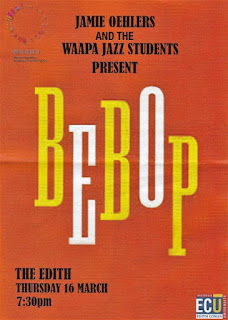 What a way to commence WAAPA's 2017 performance season with the very first public show in the glorious Edith Spiegeltent now on the ECU Mount Lawley campus after its stint as home to La Soiree during Fringe. It is a venue that is fast becoming one of my favourites with an old world charm that is unique in Perth.
Add a night of bebop jazz by two talented ensembles of students, a cider from the bar to be enjoyed during the show (a first), and good acoustics from my 4th row seat and this was an enjoyable start to the year.

Standouts from Set 1 were Chris Musitano on trumpet and Malachi George on guitar with the highlight being Lover Man, sung by Reece Clark with smooth as 60 year old Scotch style.

Set 2 gave that song a run for its money as the "quintessential bebop tune" with Thelonius Monk's 'Round Midnight featuring Daniel Khaimov on alto saxophone though the latin flavoured Barbados was the highlight for mine. Standouts were Adriane Galante on clarinet and 18 year old Michael Ellis on guitar.

But everyone played well with plenty of solos and engaging introductions by Oehlers and Galante as respective 'emcees' for their sets.

There are far worse things to be doing on a Thursday night than sitting in a venue with atmosphere and history to burn listening to a distinctive style of jazz, drink in hand, marvelling at the talent of the students and that 'old guy' Jamie Oehlers, Senior Lecturer and a mean sax player in his own right.

*originally published at facebook.com/perththeatrereviews
Posted by Richard Hyde at 12:28 No comments: