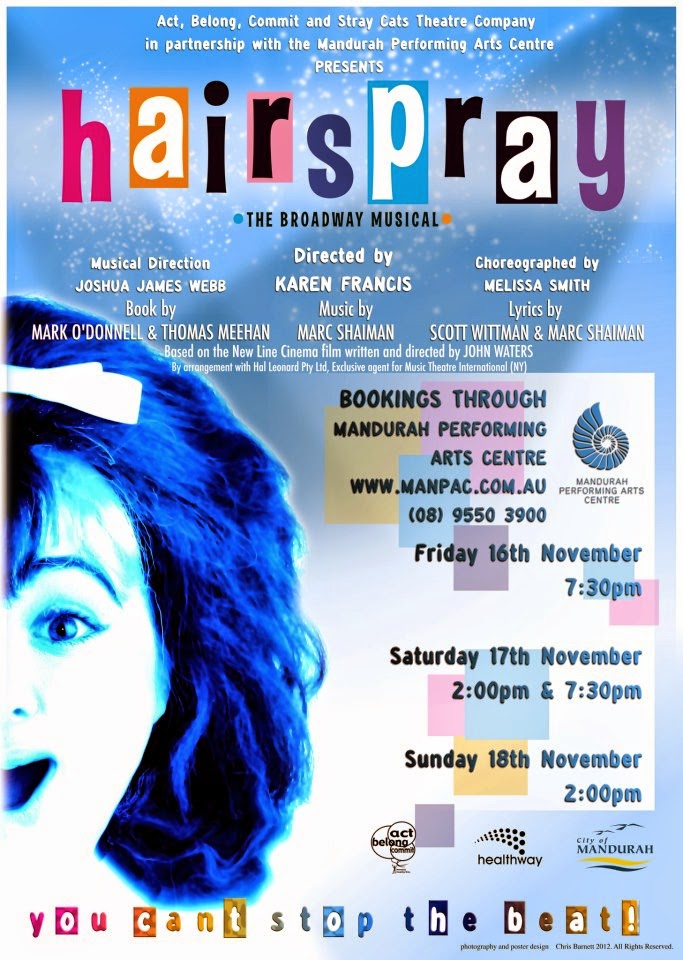 What better than a pleasant drive on a Saturday afternoon to spend time with the nicest kids in town? Yes, The Corny Collins Show was broadcasting live from downtown Mandurah and my, what a turnout of talent it attracted! This was an exceptionally strong singing cast accompanied by a live band in fine form. But more of that - much more - later…

First, let’s set the scene. It’s 1962 in Baltimore and Omar Little is several decades away from picking up a shotgun in anger. Okay, my knowledge of Baltimore is a little sketchy, The Wire references aside. What we do know is that the presumptive villainess of the piece, Corny Collins Show producer, Velma Von Tussle (Natalie Burbage), isn’t down with the whole idea of racial integration. Her daughter Amber (Victoria Luxton) expects to follow the family tradition of entitlement and beauty queen status and is the featured talent along with resident heartthrob Link Larkin (Sam Chadwick). What to do then when overweight teenager Tracy Turnblad (Sam Ferguson) not only joins the show but has ideas of integrating dancers from ‘the other side of town’ including her friend Seaweed (Jason Arrow); stealing Link away from Amber; and usurping her Miss Teenage Hairspray status as well?!

Okay, the plot is as thin as a pancake left out on Kwinana Freeway during peak hour but it doesn’t matter one jot. The songs are terrific and it moves at a cracking pace. In fact it only slowed down whenever minor plot mechanics intruded especially towards the end of the first act as plans are formulated and early second act as they are (re)committed to. Other than these moments there are few dialogue heavy scenes which serve this well. This is a far more thematic piece which, at its heart, deals with the issue of racism in America at that time. It can be a little too overt and borderline preachy but I chose to see it as an outsider with a dream (Tracy) who, in striving to make that dream come true, creates a better reality for herself and those around her. An allegory for the Civil Rights movement, sure, but perhaps just as valuable for those who don’t “fit in” whatever the situation.

The vocal talent was outstanding across the board and even performers in smaller roles had an opportunity to shine. For example, in one number three performers reminiscent of The Supremes were singing backing vocals but let loose with individual bursts at the end that was jaw dropping. Natalie Burbage also gave us some vocal fireworks towards the end of Act One. So many other ‘big voices’ in the cast but special mention to Sam Ferguson who, at only 17, was very impressive in the lead role; Jason Arrow, who added a real soulful flourish to proceedings; and Ebonyelle Smith who had, in my view, the standout song, “I Know Where I’ve Been” which she hit out of the ballpark. Georgia McGivern as Penny also snuck up on me and her character perhaps went through the most significant arc.

Craig Griffen threatened to steal the show as Edna Turnblad and his set piece with Jack McKenzie (Wilbur Turnblad), “Timeless to Me”, was funny, sweet and endearing. I should mention there is a lot of humour in this, including some sly period references and innuendo that may have sailed over younger audience members but had me chuckling away happily. Natalie Burbage and Victoria Luxton were perfectly matched as mother and daughter and while Velma Von Tussle was perhaps more of an over-the-top villain, Luxton played Amber, the bitchy rival to Tracy, with the right mix of sassiness and disbelief (as events turn against her). Tate Bennett played the man himself, Corny Collins, with great charm and cockiness.

This was a big, colourful production and a live band added so much to proceedings. The costumes and choreography were fantastic and it has a cast of some 28 strong so my apologies for not mentioning them all! The only technical hiccup was a minor problem with one of the performer’s microphones towards the end but other than that it was a thoroughly entertaining afternoon. I was also delighted to see a large turnout for a Saturday matinee. Such a big production comfortably inhabited the Mandurah Performing Arts Centre venue.

Lastly, two quick observations that I found quite charming – there was a young lad in front of me, maybe ten years old, who kept looking over his shoulder to try and see the “big board” the actors were “staring at” as the results of Miss Teenage Hairspray came in at the end. Loved that! And as I left a girl of maybe six was skipping through the lobby singing “you can’t stop the beat”. I’d say that is a job well done!

Congratulations to director Karen Francis and all the performers, crew and behind the scenes staff involved. A great show!
Posted by Misadventures in WA Film at 15:12 No comments: