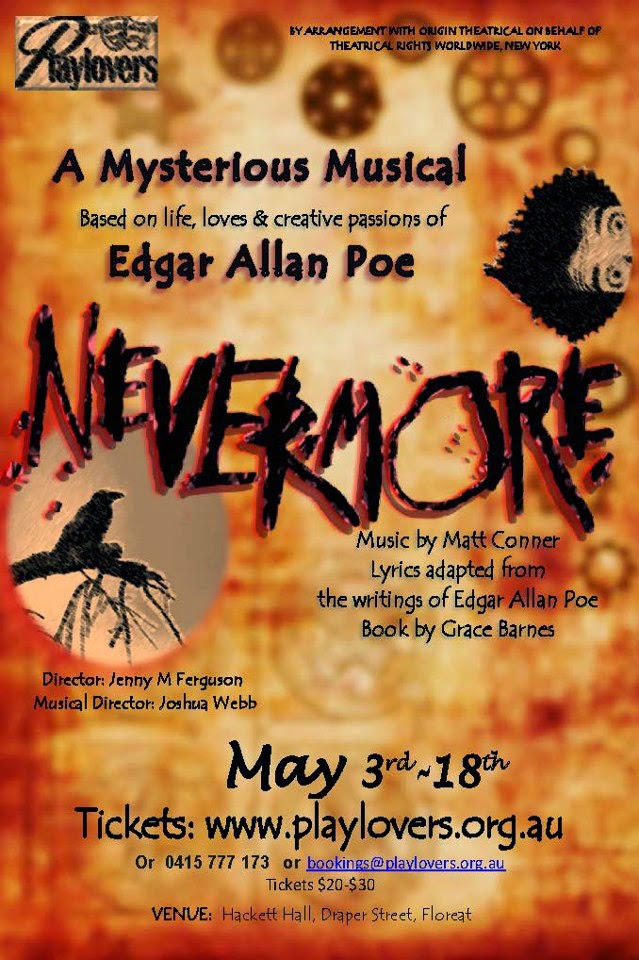 Just returned from seeing the musical Nevermore on a bleak, rainy night which suits this material down to the ground. The friends who accompanied me are Edgar Allan Poe fans but my knowledge was limited to a childhood reading of The Murders in the Rue Morgue with its memorable solution.

This is a relatively new musical and it was only on talking to cast members and the musical director afterwards that I discovered in its original form there is supposed to be only one performer playing Edgar Allan Poe. Here there are three! The transitions between Edgar (Paul Spencer), Dark Edgar (Caleb Robinson-Cook) and Young Edgar (Tate Bennett) are brilliantly done and really add to this version.

The costumes are outstanding and the set quite ingenious to help mask those transitions and add to the overall atmosphere. The decision to have the musical ensemble in front of the stage in full sight of the audience was a good one and they were in fine form. There were some problems with a performer's microphone which was a minor distraction, however the cast were in fine singing voice.

The songs were unfamiliar yet there were many strong numbers especially in the Second Act which felt more traditional musical theatre style. The highlight being "To My Mother" which is appropriate as Nevermore focuses on the women in Poe's life and how they shaped him as a writer. Ever present is the ghost of his Mother (Gemma Sharpe) who admonishes and cajoles Poe while his Mother-in-Law (Vivienne Glance) fears Poe will draw her daughter into his ever increasing darkness.

The other three women in Poe's life are his wife Virginia (Monica Brierley-Hay); first love Elmira (Tyla De Brett); and Whore (Donna-Maree Gavin). All are clearly delineated and shine a light on different aspects of Poe's descent into his own personal darkness.

During the Second Act it hit me that there is so much commentary on what it means to be a writer. "Who am I if I don't write?" Poe exclaims at one point. Exploring reality, truth and impact of allowing your demons to infest your work. The nature of writing and how it may affect those around you. Powerful and memorable.

My friends remarked it did end on a downbeat note but a story about Edgar Allan Poe was never likely to have a happy ending.

I thoroughly enjoyed this and would highly recommend it.
Posted by Misadventures in WA Film at 15:20 No comments: