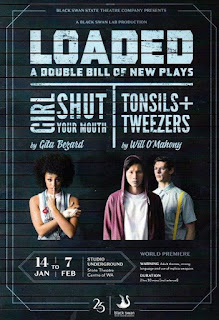 In the second half of the Loaded double bill playwright Will O’Mahony tackles a question that many must wonder when they see the never ending horror of mass shootings most notably and tragically in the US – what could possibly make someone do such a heinous thing? That he does so while giving us a treatise on friendship and an unexpected ending that is emotionally sublime is quite astounding. Throw in a little Macbeth for good measure, a dash of his own The Mars Project, rapid fire dialogue that would make Aaron Sorkin blush, and even a pinch of Wham and you have a potent and darkly humorous play that is as entertaining as it is thought provoking.

It is anchored by an incredibly likable performance by Lincoln Vickery as Tonsils. Vickery, dressed only in boxer shorts, has total command of the rat-a-tat dialogue that is delivered at breakneck speed. His banter, on stage direction of other characters, and address to the audience in asides is so well pitched that it’s a delight to experience. Tellingly, it’s when Vickery slows down that the emotion of the piece blossoms as we come to understand the true nature of his friendship with Tweezers played by Hoa Xuande.

Xuande is excellent as the friend who brings a gun to the table. His Tweezers is everything Tonsils is not – struggling with momentous events from his youth that reverberate ten years later as their high school reunion approaches. He is diffident, angry, confused… and wants to kill someone. Xuande handles the unravelling of the character very well as the play comes to an emotional climax.

Throw into the mix Max (Adam Sollis) who bullied Tweezers at school and we slowly come to understand why Tweezers could actually contemplate doing the unthinkable as the past is teased out. It’s a much welcome return for Sollis, a 2014 WAAPA graduate, who was outstanding in his third year productions and is in cracking form here. He gives the now property developer Max who is about to tread the boards for the first time (as Macbeth no less!) a knockabout quality that is totally engaging. There’s also a bit with a toothbrush that is hilarious.

Then there’s Megan Wilding. I can’t think of a local actor who does more with less than Wilding. With one line she can have an audience in stitches or awestruck silence. She has a command of the stage that is simply compelling. Here Wilding plays a school teacher; the actress who will be Lady Macbeth; and adds asides with such gusto that she threatens to steal proceedings whenever she is on stage if however briefly. Again though, it’s in her quietest moments during a description of what could happen if Tweezers carries out his plans that is devastating.
The play starts with what initially felt like a continuation of themes from The Mars Project as Tonsils tells us about binary stars and elliptical orbits as analogies for friendships. I’m discovering that a signature item of O’Mahony’s writing is the repeated use of a key phrase or concept that has thematic heft. This time it's that 'things together want to be apart and that things apart want to be together', referred to multiple times throughout. O’Mahony’s dialogue is exceptional and he clearly has a love for language, words and wordplay. It all races towards a surprising conclusion that is cathartic for both the eponymous duo and, dare I say it, the audience.

This is a very funny but no less confronting play. It has an excellent script and wonderful performances across the board. Written and directed by Will O’Mahony and starring Adam Sollis, Lincoln Vickery, Megan Wilding, and Hoa Xuande, Tonsils + Tweezers is on at the State Theatre Centre in the Studio Underground along with Girl Shut Your Mouth until 7 February.
Posted by Richard Hyde at 13:21