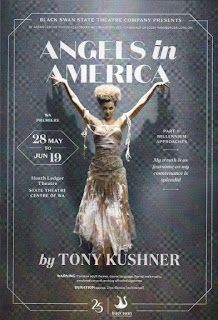 There are many things other than angels hovering over Tony Kushner’s generally recognised modern master work – Reagan’s America, the impending turn of the century, fear and prejudice as the AIDS virus takes hold, a sense of mortality as we are buffeted by politics, religion, disease, and our own weaknesses. It is gloriously theatrical, brutal, funny, confronting, compassionate, but above all else human. It deals with the inner turmoil of failing to cope with a loved one who is dying under terrible circumstances or mentally decaying before your eyes; the denial of one’s own sexuality through either expediency or guilt; the yearning for connection and love even in the most terrible of circumstances. Within those dilemmas and human interactions is a precise sense of time and place. The coming end of the millennium is truly an earth shattering event.

Black Swan’s production is a finely acted and stylish piece of theatre that befits the rightly lauded writing. The first half of this preview flew by in a dazzling 90 minutes. The second half gets a little funky as the hallucinations and visitations become bolder until it all ends in a crescendo that has you wishing Part Two was but a dinner break away.

The stage is flanked by impressive lighting rigs that are utilised in style by lighting designer Matt Scott from the stark whiteness of Antarctica to night time interludes in Central Park to the announcement of a divine messenger. There is judicious use of music by Ash Gibson Greig including a gorgeous version of Moon River on only violin and piano in a moment that is both joyous and heartbreaking as AIDS ravaged Prior Walter (Adam Booth) dances with his estranged lover Louis Ironson (Will O’Mahony). 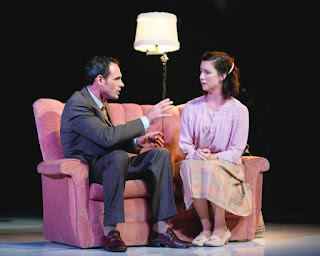 The set takes full advantage of the technical wizardry available at the Heath Ledger Theatre. Director Kate Cherry and Set Designer Christina Smith have wisely gone for a minimalist look with settings represented only by a key piece of furniture – Ray Cohn’s desk, a wash basin, a settee, a hospital bed etc that all effortlessly glide into place. The transitions are slick and the focus is on the performances and Kushner’s prose that is, at turns, poetic, cruel, dagger sharp or slyly funny. And make no mistake there is great humour to be found here amongst the emotional tumult. The climactic ending summons the full arsenal of lighting, sound, costuming, and set design as the world literally falls in on Prior.

The standout performance of the first half belongs to Jo Morris who plays Harper, a woman struggling to deal with her own demons including fear of climate change and the strange noises coming from the bedroom. Reliant on Valium, Harper conjures imaginary friends and hallucinations with a self-awareness that is funny but laced with poignancy. Morris displays wonderful comic timing especially in the hallucination sequences which she tackles with relish. But the irrational fears and reliance on pills are given harrowing treatment as well. The second half suffers a little from her lessened presence except for the bravura Antarctica sequence that is a highlight for Morris.

The other standouts are Adam Booth as Prior who gives an emotionally truthful performance as a man not only dying from AIDS but devastated at Louis’ withdrawal; and O’Mahony as Louis who has a complex arc as he seeks solace in his ‘betrayal’ by engaging in acts of cold, random sex while striking up an unlikely friendship with Harper’s husband Joseph Porter Pitt (Stuart Halusz). Joe has denied his sexuality until finally confessing he is a homosexual over the phone to his mother in an all too real awkward moment of self-loathing and revelation. Prior and Louis coming to terms with their relationship and Prior’s imminent death is the backbone of the second half with Booth and O'Mahony compelling. 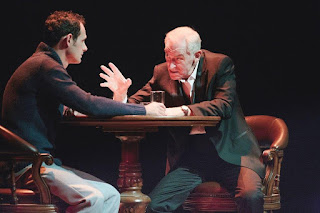 John Stanton plays the loathsome lawyer and power broker Ray Cohn with expletive laden relish but it’s in the quieter moments where he excels – the scene with Joe at a bar and his confrontation with a ghost from the past are memorable. The rationalisation Cohn gives on learning of his medical condition is delivered with chilling pragmatism by Stanton – status and power are the only language the character understands and deals in. Halusz in many ways has the trickiest role as his Joe is an earnest character who denies his true self and remains principled in the face of Cohn’s temptations and his wife’s descent into fantasy. He plays the Mormon lawyer with a straight forwardness that works in contrast to the showier roles around him and acts as a foundation of sorts for the audience.

The only weakness is Kenneth Ransom’s dual roles of Harper’s imaginary friend Mr Lies and the gay drag queen Belize. The latter simply isn’t flamboyant enough and the former lacks any flair. Both are opportunities to ‘go large’ but ended up being flat portrayals barely differentiated from each other. Felicity Mckay and Toni Scanlon round out the cast with Scanlon especially engaging as the Rabbi. 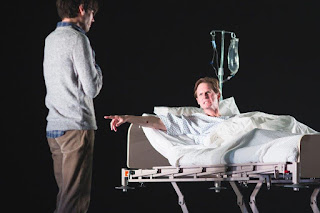 I enjoyed the superb first half more than the second which had some odd scenes that seemed somewhat extraneous (largely revolving around Joe’s mother coming to New York) or verging into Pythonesque territory (Prior’s ancestors visiting his sick bed). Otherwise this was an excellent production that showcased Black Swan’s considerable technical and performance capabilities.