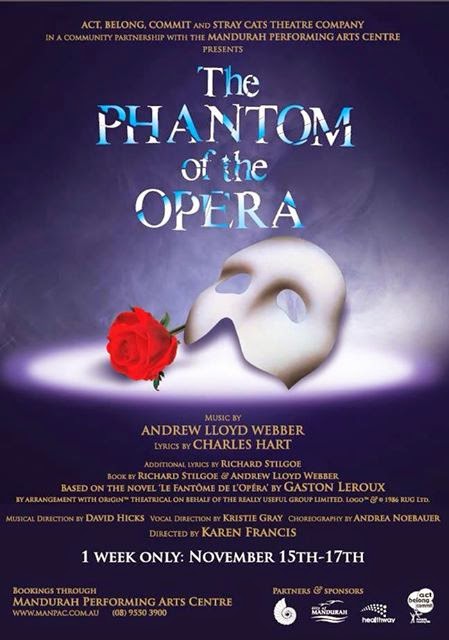 Yesterday I travelled down to Mandurah for a production of The Phantom of the Opera. This is the fourth time I have seen Andrew Lloyd Webber’s best known work, the previous three being in Sydney where my slow journey to musical theatre appreciation began. Indeed, it is the first musical I ever recall going to, circa 1995-6.

Dissolve to flashback, probably in black and white with period costume and a lamentably scratchy soundtrack to denote a simpler, more analogue time.

… Sydney in 1994 for work and my parents had proudly announced they were taking me to Phantom of the Opera when they were next coming to visit."

Parents (proudly): We’re taking you to see Phantom of the Opera!

Me: Am I being punished for something?

Parents (enthusiastically) (yes, they always talked in wrylies back then): You’ll love it. It’s GREAT!

Me (thinking to myself): I wonder if I can fake my own disappearance before they arrive…?

It’s true, they didn’t literally drag me to the Royal Theatre; they actually physically deposited me in the third row because I thought going to a musical was tantamount to sticking my head in a vat of boiling fat.

Then something strange happened.

Cue something-strange-happening music and the introduction of fake smoke for effect.

I kind of liked it!

Dad still tells the story - yes, even last night when I followed the coast back up to the family home for dinner - that in the early going when the chandelier plummets to the stage I jumped three feet in the air.

I had no idea what to expect so the spectacle and showmanship of it all had this tyro enthralled. I enjoyed the songs even though I’m not a fan of Act 2 with its reworked melodies and lyrics from the first half.

I ended up taking my sister along when she visited from Canberra; then later my partner at the time which started a tradition. For her birthday we would go out to dinner, see a show, then have supper on my balcony, my apartment being in the heart of the city. I think, maybe, possibly, one of the other shows was Crazy For You and I can’t recall the third. I also saw Les Miserables on a return visit by my parents.

I returned to Perth in 1998 and musical theatre largely became an afterthought.

There were sporadic outings:

We Will Rock You when I was in Melbourne for work in 2003.

Porgy and Bess at His Majesty’s Theatre in Perth.

Cabaret on a return visit to Sydney.

Jeff Wayne’s War of the Worlds at Burswood Dome.

Christmas with the Andrews Sisters in 2011.

Checkout the Musical as part of 2012’s Fringe Festival.

We Will Rock You was horribly written by Ben Elton but had all those classic Queen numbers so nobody seemed to mind the abysmal storyline as we sung along raucously.

Bare featured a ‘wow moment’ when one of my favourite local performers, Rhoda Lopez, launched into “911! Emergency!” and blew the walls off the joint. It also featured Gemma Sharpe who would later read for me at Script Lab, and, unbeknownst to me until recently, Cassandra Kotchie, who made my coffee at a local writing haunt for ages before confessing she was a WAAPA musical theatre grad (Cass!).

I adored Spamalot and have never laughed so hard especially at the audacity of "You Won’t Succeed on Broadway".

Avenue Q gained greater significance when someone texted me the first two lines of "There’s A Fine, Fine Line" and I rediscovered how good the songs really are, especially that gem of a number.

These were still largely one off events. You’re in a different city for work so you blow off time by going to a show. Or you get free tickets as was the case with War of the Worlds and Avenue Q.

Things began to change while I was doing the PAC Screen Workshops from 2005-2007 and my circle of friends and acquaintances expanded to include far more actors. I’ve written before about my joy of supporting talented friends in their acting endeavours in stage (and film). However, I was attending significantly more plays than musical theatre but that ratio has slowly shifted in the last couple of years.

2012, however, was the major turning point when I saw three shows that featured a then friend and really enjoyed each one. She is a talented performer and it opened my eyes to a vibrant independent musical theatre scene. For as little as $20 you could see a fabulous show with real talent and commitment. While we’re no longer friends that revelation she was the catalyst for has propelled me into 2013 where yesterday’s show was the ninth musical I’ve seen this year. The other eight are:

The Wizard of Oz, The 25th Annual Putnam County Spelling Bee, Curtains, The Producers, Nevermore, Madame Piaf, Cats, and A Pirate’s Life For Me.


I guess I should pause to talk a little about the local incarnation of Phantom. Paul Spencer was fantastic as the eponymous villain and was well supported by Kristie Gray, Cassie Skinner and Jake Garner as Carlotta, Christine Daae and Raoul respectively. The sets were good and apart from a few technical hiccups with microphones (thankfully, minor characters in minor moments) it was well presented. The problem, however, to my ears, was the orchestra which was all over the place. So while the singing was good with Spencer the standout, they were constantly battling the music which was muddled and didn’t do the piece justice.

Having said that the theatre was full and there was an enthusiastic standing ovation so it has no doubt done well. Though again, only a 4 show run, the same as Hairspray by the same company last year which I enjoyed far more.

I had rather impulsively booked a ticket and it has brought me full circle from being horrified to see a musical back in the mid-90s to now savouring these local productions with such talented people on stage and all the crew and technicians who make them a reality.

To my musical theatre friends I say this - I finally have joined the party as an enthusiastic and consistent audience member! Just promise me you’ll never, ever ask me to sing!

What other shows should I see? What are your recommendations? Chicago is one of my all-time favourite movies and I’d love to see Velma Kelly and Roxie Hart onstage but hit me up with some other productions I should look out for!
Posted by Richard Hyde at 15:40