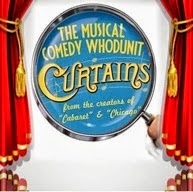 When the supremely untalented star of Robbin’ Hood of the Old West is murdered during her opening night curtain call, Lt. Frank Cioffi must save the show and solve the case – without getting killed!

This sleuthing business seems to be an exhausting task. What with all those suspects and a show that still has to be staged. Sleuthing whilst singing and dancing? Truly remarkable!

Let me say right off the bat that I loved this. Sometimes you go to the theatre for thought provoking drama, maybe to see something experimental or the work of a new playwright. Sometimes you get a rollicking, entertaining ride that is flat out enjoyable from start to finish. The latter was certainly the case tonight at Playlovers production of Curtains.

Billed as a "musical comedy whodunnit", the show has an immediate pedigree with the presence of Kander and Ebb in the credits. There were, indeed, moments of dialogue and music, even story beats that reminded me very much of Chicago. Then there was an odd [I named a play here that might give the game away so I have redacted it] vibe in the latter stages but we'll get to that later.

This is a big, bold, sassy musical with great songs, big set pieces and is genuinely funny. For an independent theatre company to tackle such a huge production (26 cast and a 10 piece orchestra) is wildly ambitious. To pull it off in such style is to be absolutely applauded. Great also to see a full house on the night a local football team was dominating the conversation around town.

The story revolves around the murder of the presumptive yet untalented star that no-one likes (an amusing cameo by the director!) of a new show opening in Boston that all involved hope will make it to Broadway. The cast are "sequestered" within the theatre as a police detective struggles to solve the crime whilst falling for one of the show's lesser stars; advising on how to make the production threatened by poor reviews better; oh, and dealing with the murder of other cast and crew members along the way.

It plays with the isolated murder-mystery trope but also amusingly comments on the myriad of issues faced when mounting a large musical production. The show within a show device plays out nicely with numbers reworked and reprised as part of the race against time to garner a more favourable review from a nasty Bostonian critic.

I apologise in advance for not mentioning the whole cast but they were uniformly excellent. Of the main performers:

Tyler Jones plays Lieutenant Frank Cioffi and he was fantastic in a role that had a LOT of very precise, rapid paced dialogue. He handled it with aplomb and was the standout from the moment Cioffi makes his introduction.

Claire Taylor plays Nikki Harris who "has her fingerprints over everything" and is the attention of Cioffi's romantic affections. They have a lovely dance number in the second act and Taylor plays Nikki with an endearing mix of ditziness and innocence.

Therese Cruise is the lyricist who assumes leading lady status after the murder of unpopular star Jessica Cranshaw. Sporting the strongest singing voice, Cruise has several great numbers, the highlight being the "Wide Open Spaces" finale. Her character is involved in the second love story here, playing off Tom Hutton whose character is her songwriting partner and estranged husband. They have a touching moment in "Thinking of Him/I Miss the Music (Reprise)" in the second act.

Other standouts are Helen Carey as the producer Carmen Bernstein who has a hard-headed approach to the theatre business ("It's A Business") and daughter Bambi played by Tamara Woolrych. Why does she call herself Bambi? The answer says a lot about the mother-daughter relationship and Woolrych threads the needle between bitchiness and disappointment as her character tries to prove her worth in the large shadow cast by her mother. Speaking of bitchiness, David Nelson as the director has a grand old time slinging insults the way of all and sundry to hilarious effect.

The set is simple but effective. The costumes are great with the added razzle-dazzle of typical showgirl flourishes. The orchestra was at times a little too loud for the singing but otherwise was in good form. The choreography took total advantage of the large space and the show was full of movement, never slowing down for an instance.

The story gets a little convoluted and silly deep in the second act as twists are revealed and revelations made but by that stage I was well and truly sold and having a great time with this. So I forgave the few quibbles I had with such plot machinations which reminded me of the aforementioned play that I didn't aforemention. The cast had insisted in the closing number bad things could happen to anybody who revealed the murderer! So I'm not even risking an obtuse reference!

Directed by Kristen Twynam Perkins with Musical Direction by Belinda Flindell and Choreography by Tammie Anne Rafferty this is definitely one to recommend.
Posted by Richard Hyde at 15:23