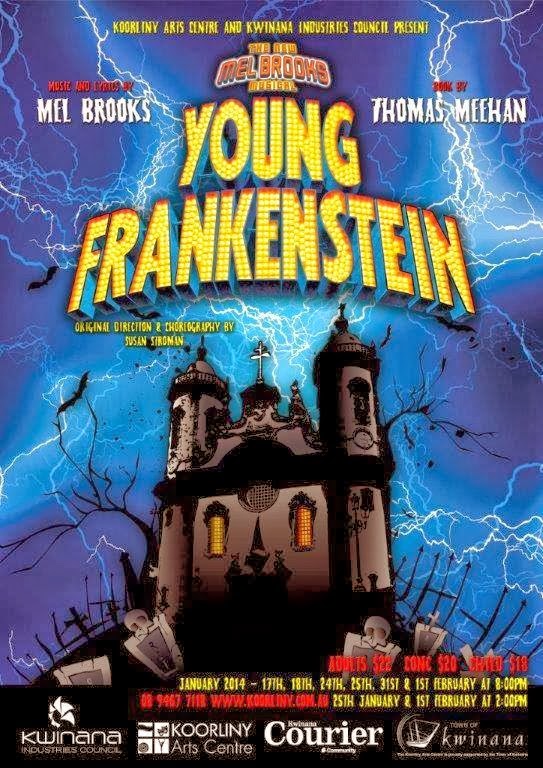 Lured by the sound of a lone French horn I embarked on a hay ride to Castle Frankenstein located in deepest, darkest Kwinana for a little transference, a lot of mania and some deep love. Yes, Young Frankenstein the Musical was on the loose at the Koorliny Arts Centre and what a rampage it is.

I was greeted by the flickering of lightning, the crack of thunder and a suitably ominous stage. It’s 1933 Transylvania and the villagers are celebrating the death of the infamous Doctor Frankenstein (The Happiest Town). But their happiness is disturbed when it’s announced that a Frankenstein yet lives in New York City of all places. Here we find the good doctor’s grandson Frederick Frankenstein or as he insists, “Fronkensteen”. A scientist, he is fascinated by the brain (The Brain) but ashamed of the family name.

On hearing the news of his grandfather’s death he reluctantly leaves New York and the hands-off charms of his fiancée, Elizabeth (Please Don’t Touch Me) and heads to the family castle where he meets the hunchback Igor (pronounced eye-gore), his lab assistant Inga and the wonderfully strange Frau Blucher (obligatory neigh). Entreated to continue the family business by the ghost of his grandfather (Join the Family Business) young Frederick begins his descent into mad scientist territory and a Monster is duly created with unexpected and hilarious results.

Based on the Mel Brooks’ movie of the same name, it exhibits the typical Brooks sense of humour as it parodies the horror genre. The gags can be a little hit and miss but I generally found this very funny. It is also performed and directed with great verve and there are many wonderful set pieces.

But first, the performances.

Jesse Angus is superb as Frederick Frankenstein, a character that is cocky, arrogant, even smarmy when we first meet him in New York but becomes the brilliant mad scientist as he recreates and then exceeds his grandfather’s greatest triumph. Angus attacks the role with impressive energy and the appropriate level of mania as “Fronkensteen” indeed embraces the family business. He has excellent chemistry with Igor played with relish by Laurence Williams; and Brooks’ archetypal Scandinavian blonde, Inga, played by a sparkling Sarah Elizabeth Hubber. Williams’ comic sidekick, hump and all, adds plenty of sly humour while Hubber gets to be both ditzy and sexy to great effect.

Natalie Burbage’s Frau Blucher (neigh) is suitably over-exaggerated as the mysterious housekeeper; Jon Lambert an imposing Monster whose howls of frustration and despair become something far more articulate in the latter stages; and Allen Blachford’s Dr. Frankenstein looms over proceedings with a couple of pivotal scenes.

The unexpected visit to Transylvania by Georgia McGivern’s Elizabeth (Surprise) in the second act is the catalyst for all sorts of shenanigans, one of which leads to her revelatory number Deep Love. Daniel Burton’s Inspector Kemp rallies the villagers to storm the castle but it’s his blind Hermit that provides one of the highlights as he unknowingly entertains the Monster (Please Send Me Someone).

The beautifully staged Roll in the Hay as Frederick and Inga make their way to the castle in the back of a hay wagon… with yodelling;

Victor Frankenstein (and ancestors) exhorting his grandson to continue his work in Join the Family Business;

And the show-stopping numbers Transylvania Mania that closes out the first act, and, of course, the delightful Puttin’ on the Ritz where Frederick shows off his Monster in all his tap stomping, coat and tails glory.

The ensemble gives great support as variously villagers, students, ancestors and the band were very good. The transition between scenes was handled effectively with a screen also used to indicate the setting (laboratory etc) and project images such as the late Doctor Frankenstein.

This is crazy and high camp at times but it works due to a talented cast committed to the absurdity of it all. I certainly found myself laughing along merrily and tapping my feet to several of the numbers.