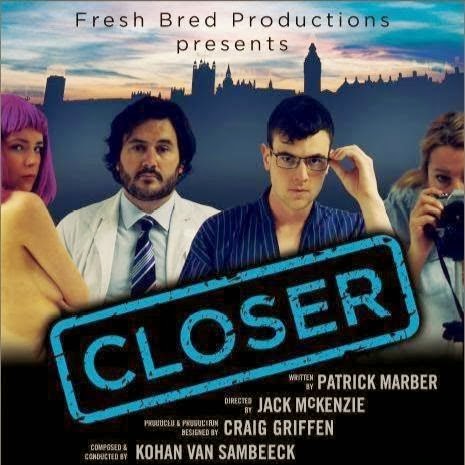 Take a razor sharp script, four talented and committed actors, a fresh approach from a first time director then add an original score played live and you end up with this excellent production of Patrick Marber's Closer.

Marber's script is first class, delighting in pointed and brutal verbal exchanges, wry observations of modern relationships and deliberately shocking language such as the infamous chat room scene. It plays with time as these four people become entwined in each others lives for good and bad over several years. Love, sex, truth, sexual politics, intimacy and betrayal are all fair game here. This isn't a delicate examination, however. This is warts and all with real anger and hurt amongst the declarations of love and moments of tenderness. All is underlined by an almost cruel and biting wit.

The acting across the board is very good - Brodie Masini as Dan, the failed novelist who writes obituaries whilst also masquerading as something altogether different online; Natasha Stiven as the mysterious and vulnerable stripper Alice; Jason Dohle as Larry, the doctor who becomes embroiled in proceedings after Dan's online practical joke; and Diana Oliver as the photographer, Anna, who falls for Dan's advances at a photo shoot and later Larry at their "chance" meeting.

In fact they are very good indeed. Masini's Dan is the more idealistic and earnest of the two men compared to Dohle's passionate and temperamental portrayal of Larry. Oliver's Anna is down to earth and grounded while Stiven's Alice is playful yet fragile. The characters are so well drawn that each actor can really throw themselves at the material and what a volatile mix it is.

Relationships wax and wane as revelations of deceit and betrayal cause major shifts in the power dynamic between each of them. There was never a moment I didn't believe the truth of what was being portrayed in what is a complex emotional journey for all of these characters. There are also scenes that require total commitment, notably the strip club scene at the start of the second act. Kudos then to all four actors for their fine performances.

The set is minimal with draped sheets forming the entire backdrop with cutaways for entrances/exits. This was used ingeniously to project images onto to give a sense of place like moving fish at the Aquarium or stills at the Art Museum... and of course the explicit online chat between Larry and Dan (posing as Anna). It also allowed "opening credits" (like a movie) to be shown and my only regret is when I discovered later there was no programme and therefore should have been playing more attention to these!

Scene changes are made swiftly and economically and there are occasions when pairings of actors are playing scenes side by side. This works seamlessly especially the sequence when both women leave their respective lover.

A key decision was not only to utilise an original score - written by Kohan van Sambeeck - but to have himself (piano) and Stephanie-Jane Lewendon-Lowe (violin) perform on stage behind the sheeted backdrop. This added enormously to the tone and immediacy of the action without ever being intrusive. Great to see then both musicians come on stage to take a bow as they are an integral part of what is an, at times, in your face and nothing less than compelling production.

Directed by Jack McKenzie and Produced by Craig Griffen with an original score written by Kohan van Sambeeck, Closer is a treat. I would tell you to go and see it but, alas, the run is already over. It does, however, show that the Koorliny Arts Centre is off to a cracking 2014 with this and Young Frankensteinalready having been staged. I look forward to my next trip down the freeway to Kwinana!
Posted by Richard Hyde at 16:00