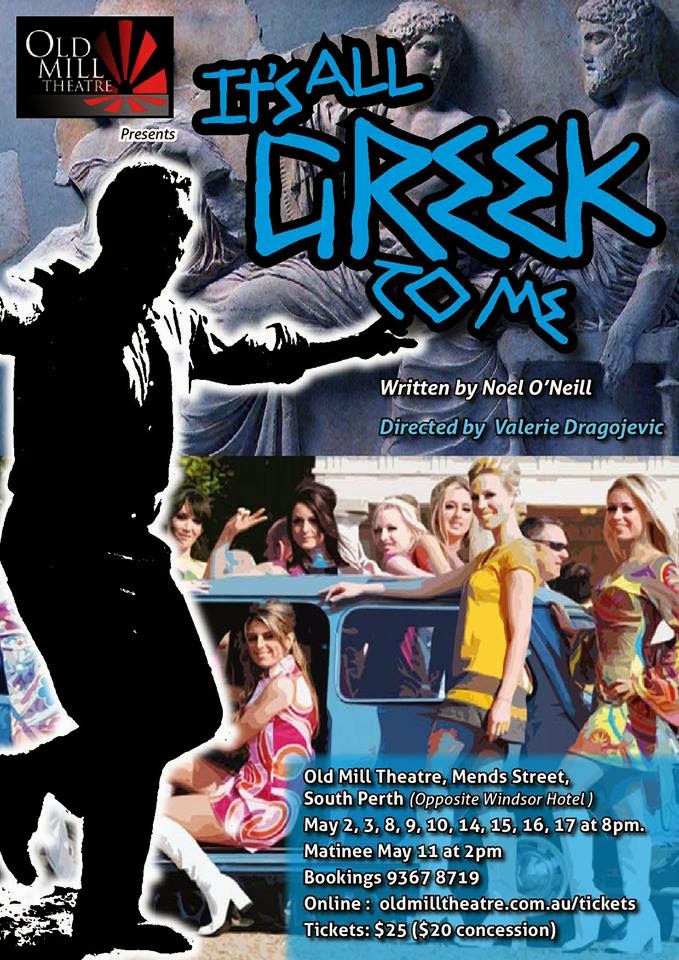 There I was hanging around in the bar at the Old Mill Theatre not long after today’s matinee had concluded. In strolls the writer, Mister Noel O’Neill. We clock each other, exchange “I haven’t seen you in a long time” pleasantries and (in surely a moment of weakness) I buy him a beer. Chink of glass before we go outside to sit in the glorious Mother’s Day sunshine to have a chat.

Part of the discussion is how prolific Noel is as a playwright but more to the point, how he has two emerging strands of play – the more serious fare (Under Any Old Gum Tree, Holly and Ivy) and the ‘kitchen table comedy’ of which It’s All Greek To Me is clearly a member and includes the two part trilogy (come on Noel, surely there’s a third in you!) Confetti from Graceland and Spaghetti and Graceland.

These are quite literally set around the kitchen table (an excellent set today) and involve the squabbles and heightened comic-drama of a family in some form of domestic flux.

Here it is the philandering Nicky Plankos (Kim Taylor) who cheats on his wife Athena (Vivienne Marshall) with the seemingly insatiable Circe (Nada Dilevska). His life is complicated by dim-witted son Dimitri (Cameron Leese), pregnant daughter Jenna (Valerie Dragojevic), and the antics of the suspicious Athena who has a propensity for flinging herself off the roof. Add a curse put on him by Circe and the arrival of his cousin Stavros ( Emilio Evangelopoulos) from Greece expecting to find a beautiful wife waiting for him and Nicky has his hands full. There’s nothing for it but to call in the shonky oracle Andronokos (Rex Gray) to help find the girl of Stavros’ dreams. Will it be Katarina (Jessica Stenglein) who arrives to tell Nicky she doesn’t want to be there?

Well, no, it won’t but everything is tied up neatly, the curse is lifted and everyone lives happily ever after whilst dancing off stage to the exit.

If you’re looking for a searing exploration of the human spirit then this ain’t it. If you’re after a couple of hours of fun entertainment then you’ve come to the right place. It’s no doubt that this is a crowd pleaser as the happy murmur of the audience attests to after the play finished. Noel was called away from our chat as a group of people wanted to tell him how much they enjoyed his writing. Ever the gentleman he was only too happy to oblige. Fair play, Sir.

The comedy has very much a 60's-70’s English vibe to it – a mix of Benny Hill, Morecambe & Wise with Kim Taylor compared to Michael Caine’s Alfie by more than one person and Stenglein inadvertently (as I later discovered) creating a female Frank Spencer of a character. There’s no doubt Taylor works hard in the lead role as he’s rarely off stage and uses constant asides to the audience and flourishes of physical comedy especially when he is mocking his son. Marshall is suitably shrill and melodramatic as the neglected wife and has some lovely sight gags with Leese as the son struggles to do basic tasks like wash his hands or feed himself. Evangelopoulos adds a shot in the arm with his stammering, lovelorn Stavros while Stenglein’s brief appearance is amusing.

While Noel was off talking with other audience members I went back inside to be greeted by the director who demanded, “Did I hear you laugh?” Given I am known for my distinctive laughter and propensity to use it I was somewhat taken aback. Gentle mocking on both sides ensued which is one of the things I love about community theatre - the relaxed nature and genuineness of the people involved.

The aforementioned person is Valerie Dragojevic who I know as a talented actor but is forging a career in directing with Holly & Ivy, Snow and Ash and now It’s All Greek To Me under her belt. I also had a chance to chat with cast members Vivienne Marshall and Jessica Stenglein, lovely people who, along with their fellow cast members, put on a fun show that runs until 17 May at the Old Mill Theatre in South Perth.
Posted by Richard Hyde at 21:00