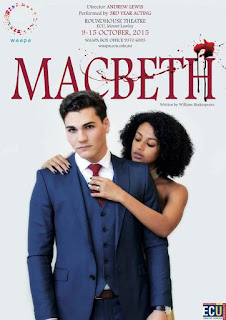 WAAPA prides itself on housing many disciplines under the one roof at the ECU, Mount Lawley campus. Not only performance - acting, musical theatre, dance, contemporary & classical music - but all the other disciplines that are required to stage a production, from lighting and sound design, to costuming, set design, and arts management. This totality of approach makes the Academy unique and was certainly on display with this modern interpretation of Macbeth.

As I walked up the long corridor to the Roundhouse Theatre I could hear the portentous rumbling of modern music which was the first sign of the multi-media accompaniment we were about to experience. As the line of patrons waited to file in, the director Andrew Lewis pointed out signs asking that the name Macbeth not be uttered inside. This is a long held tradition given the play’s reputation of being ‘cursed’.

Once inside, the freshly painted stage was bare. There was a spiral staircase up to the second level where three screens were situated; one centrally, the other two on each side. Apart from occasions where a table might be wheeled on there was little set to speak of. This is where the light and sound design came to the fore and the use of those screens in various ways. They crackled into life depicting key elements - the roiling witches' cauldron or Seyton's initial appearance for example; or indicate the setting - Birnam Wood; but most noticeably were utilised to project live video of crucial soliloquies as they were being delivered on stage.

Filmed from the upper level with at least two cameras given the juxtaposition of images, the harsh video look worked perfectly to heighten the emotion on the actor's face in close up - usually Benjamin Kindon as Macbeth but also Shalom Brune-Franklin as Lady Macbeth. The screens flickered and crackled in time to the modern, rhythmic music that was an ominous score. The lighting design was excellent with lots of diffused light through smoke and the highlighting of actors again in key moments but great use of shadow as well.

Lewis had chosen to set this Macbeth "in a corporate world inhabited by knife-wielding, suited professionals". That suited look worked well with 'armour' being replaced by police style flak jackets. Brune-Franklin looked stunning in several gowns while the other female characters were sleek in their corporate attire; the men resplendent in suit and tie. Instead of swords and daggers we had knives and some vigorous confrontations, notably in the final fight between Macbeth and Macduff (Hoa Xuande).

All these elements gave the production great atmosphere and allowed for seamless scene transitions - this fairly hummed along. Having said that there were times, especially involving the witches, where there was a languid, at times hypnotic pace within a scene that was mesmerising.

This considered and skilled approach allowed the actors to shine in the space that had been so meticulously crafted. First and foremost, Kindon was excellent as Macbeth - a strong physical presence, he also conveyed the range of emotion from the almost boyish delight on hearing the witches' initial pronouncements to doubt and rage, the full force of hubris, and the slow descent into madness. His blind conviction of his invincibility was writ large as he mocked Macduff at the end only to be undone by such misplaced faith. His terror at Banquo's appearance was well portrayed and he handled the famous soliloquies well - the softly delivered Tomorrow, And Tomorrow, And Tomorrow the best of them.

Brune-Franklin was at her best in the aftermath of Lady Macbeth's terrible cajoling of Macbeth to commit murder and seize the crown. The portrayal of guilt as she prowls the castle, sleepwalking at night ending in the famous Out, Damned Spot was strong. Those two characters' intersecting emotional through lines is always fascinating. From the stronger of the two at the start Lady Macbeth crumbles into irreversible guilt and finally suicide.

Lincoln Vickery was a most affable Duncan and later the more earnest Scottish Doctor who witnesses Lady Macbeth's malady and overhears her seeming confession. Dacre Montgomery provided a strong counterpoint to Kindon in the early going as Banquo and his return as the blood spattered ghost that rebukes Macbeth is powerful.

Harriet Gordon-Anderson, Stephanie Panozzo and Brittany Morel comprised a set of tantalising witches adding a highly stylised approach to proceedings. They also doubled as various servants and messengers. They were joined by Elle Harris as Seyton. Harris has a chameleon like quality that can see her playing a young boy (Fleance here and Tom Joad last year in Grapes of Wrath) with as equal credibility as the vamped up Seyton.

The other standout though was Jessica Paterson as Malcolm. WAAPA often likes to switch up their casting with gender reversals and here Paterson was more than equal to the task giving Malcolm an impressive strength and charismatic stage presence. Unfortunately, Xuande's Macduff wasn't up to the same calibre, the Shakespearean dialogue coming across as quite flat in his delivery.

Then there was the famous Porter scene that immediately follows Duncan's death. A radical shift in tone to provide some comic relief to the relentless darkness and allow our co-conspirators time to change. Megan Wilding nails the moment and owns the stage with a full-throated approach that had the audience laughing and squirming in equal measure.

Another highlight was the tension built up in the scene where Lady Macduff (Rebecca Gulia) cradling her baby and talking to her son (Gordon-Anderson), is assailed by Bevan Pfeiffer's and Rian Howlett's assassins. Pfeiffer's sudden appearance out of the shadows at the back of stage had the person sitting next to me pointing in warning. The resultant actions were brutal and devastating.

I walked back down that long corridor reminding myself "this is one hell of a play" and that is testament to all those elements that WAAPA brings to the table.