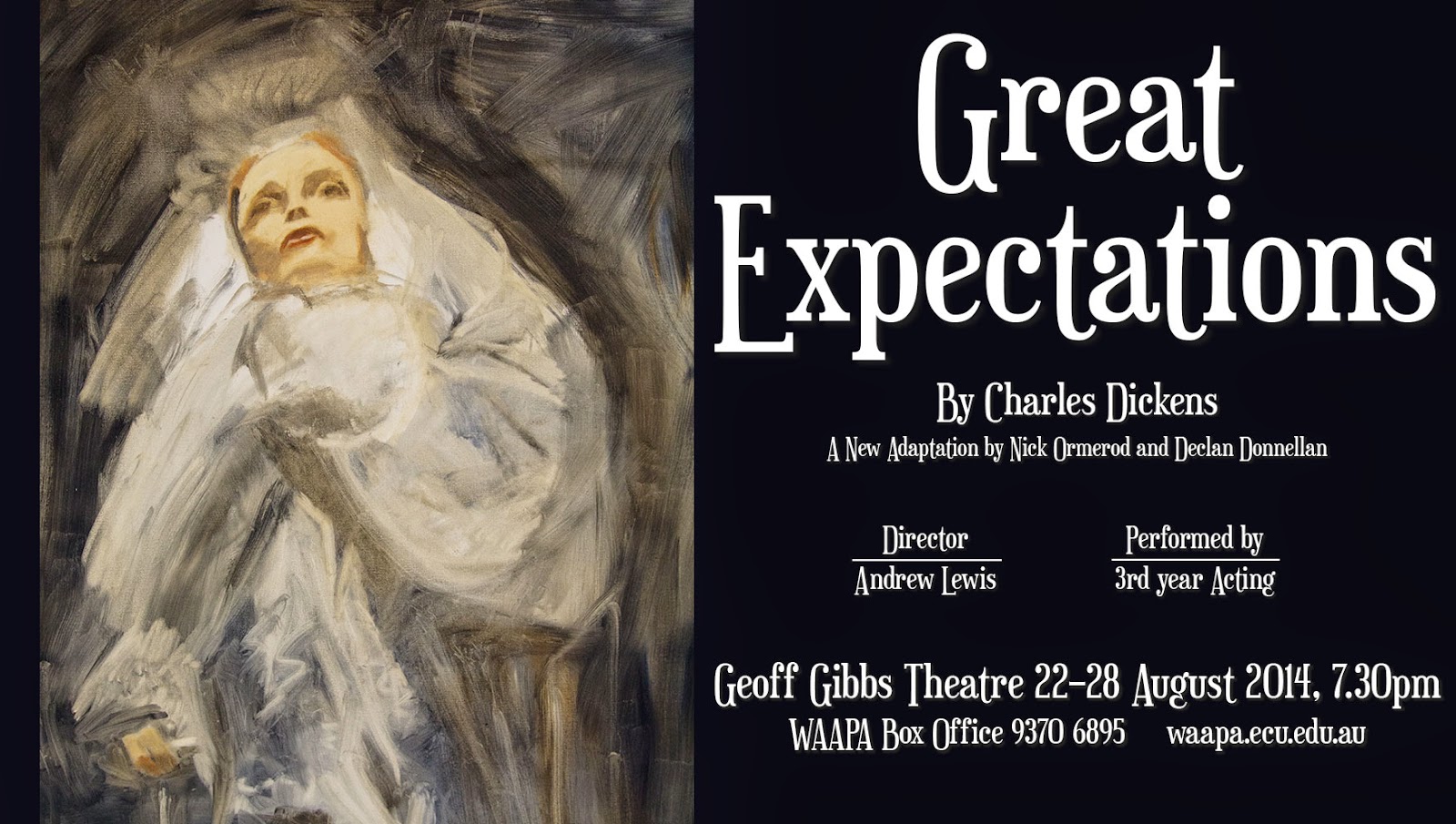 If this year’s musicals had a large number of comedies then the plays went the exact opposite direction mining a much darker vein – incest, revenge, torture, the horrors of war, school shootings, suicide, mental illness. It was a veritable line-up of misery but never anything less than compelling theatre if somewhat confronting. The Blue Room had a very strong year as did the WAAPA third years. Dramafest was a success and community theatre continues to throw up excellent performances and a diverse range of shows. I was also impressed with the work coming out of Curtin and Murdoch Universities that were both very active in 2014.

To the Top Ten:

1. Great Expectations (WAAPA)
While the Dickens classic certainly has its dark moments this was such an entertaining production with the use of the revolving chorus a wonderful device. All you need to know about how well it was received was writ large in the grin on Andrew Lewis’ face in the lobby afterwards.

"If West Side Story is the crowning achievement of the musical theatre class in the red corner then the acting cohort in the blue corner have replied in stunning fashion with this production. To extend the boxing analogy, I had a ringside seat, front row centre, at the Geoff Gibbs Theatre. And what a view it was - a brilliant adaptation of the great novel, inventively staged and directed, with superb performances across the board."

2. Festen (WAAPA)
A gut punch of a play that was a majestic horror story that made me squirm and was utterly riveting. Contains the line of the year – “Because that’s all you were good for” – that had me gasping at the monstrosity of it all.

"The performances are superb and all the more laudable because a more reprehensible bunch of characters you will not find – misogynists, racists, rapists – who are either emotionally brittle or utterly callous. They may not be likeable but it is a fascinating exploration of entrenched values within a family and how they infect each generation."

3. The Pillowman (Endless Theatre Company)
The introduction to Perth of this Irish flavoured production company couldn’t have been more impressive with this jet black exploration of the creative process itself.

"But most of all, surprisingly, fabulously, a play about stories, about writing and what it means to be a writer. About taking responsibility for what is written. About where stories come from, even the dark ones – especially the dark ones. About legacy. For what is a writer without their stories?"

4. Under Any Old Gum Tree (Dramafest)
A searing 50 minute monologue about the horrors of the First World War, stunningly delivered.

"Lastly, and fittingly, the final production of Dramafest was Noel O’Neill’s superb Under Any Old Gum Tree. Beautifully written and brilliantly performed by Kieran Garvey (with Rex Gray in support), this was powerful, moving, insightful, occasionally funny and a blistering exploration of the devastation the Great War caused on those who survived No Man’s Land."

5. Concussion (Ellandar Productions)
Subversively funny and self-aware, this was another jet black drama that had an excellent script that was embraced by a very talented cast.

"It’s deliciously clever, subversive and funny. Even the somewhat overwrought shouting match at the end I took to be a poke at the expectations usually contained within this type of tale. As a writer myself this was absolutely in my wheelhouse and I loved the cheekiness and audacity of the script."

6. The Standover Man (Subiaco Arts Centre)
Starting quite obliquely all the diverse strands slowly coalesce into a powerful narrative in this unusual underworld tale full of richly drawn characters.

"I couldn't have been more impressed. This is a beautifully written, performed and staged play. I am going to be a little oblique about the story because the writing is excellent and the play unfolds with great skill to reveal its secrets and mysteries. That journey really needs to be experienced first hand."

7. Closer (Fresh Bred Productions)
The pungent Marber dialogue is delivered with relish in this sexually charged production that doesn’t pull any punches.

"Take a razor sharp script, four talented and committed actors, a fresh approach from a first time director then add an original score played live and you end up with this excellent production of Patrick Marber's Closer."

8. Punk Rock (WA Youth Theatre Company)
The young cast plunge into this dark, unsettling tale with impressive skill and energy. The sense of play in the performances left the stage in a state of total disarray, about the same as my nerves during the explosive climax.

"What unfolded at the Subiaco Arts Centre studio was a slow burn production that was shocking, uncomfortable and powerful. It elicited several visceral responses from the audience as it built to a brutal climax and then lingered in the aftermath to let us all breathe again. That the cast was predominantly made up of young teenagers was remarkable."

9. Giving Up The Ghosts (The Blue Room Theatre)
A carefully measured two-hander as two damaged souls find themselves confronting the unthinkable as they attempt to escape their ghosts.

"I said to Sarah I was intrigued how she was going to ‘stick the landing’ as it had to be handled sensitively given the undeniably dark subject matter but truthful to the characters that had been so expertly crafted and rendered. She and the actors, Georgia King and Paul Grabovac, thread that needle beautifully to bring a powerful piece of theatre to conclusion as the lights fade on these two damaged souls."

10. This Is Not A Love Song (The Blue Room Theatre)
This is an impressive writing debut by comedian Greg Fleet who lends a dry stage presence in this mature rumination about relationships and loss. I even knew pretty much all of the songs!

"I really enjoyed this show – the writing and acting is very good, the songs well delivered (at times I felt like clapping at the end of a number though This is Also Not a Musical) and the humour is genuinely funny amongst the underlying tone of regret."

Female Performer of the Year - Georgia King
A very subtle performance playing the agitated woman in Giving Up The Ghosts with a terrible purpose. I especially liked how well calibrated the physical interactions - or lack of them - were in giving insight into the character.

Male Performer of the Year - Kieran Garvey
Simply a towering performance playing a man damaged by the horrors of war in Under Any Old Gum Tree. Garvey grabs you by the throat from the very first beat and doesn't let up. Heartbreaking, devastating, superb.

Beth Tremlett - Such an assured performance in a challenging role (Gish in Bremen Coffee) where the arc goes from battered housewife to ruthless murderer. Skillfully handled.

Luke Binetti - Only 17 years old, Binetti moves from good-natured nerd to something far more deadly in Punk Rock. "For that transformation and its consequences to be handled so convincingly is a testament to Binetti’s skill."

Jonny Hawkins - Devastating as the despicable male patriarch in Festen, Hawkins then changed gears to inhabit the lovable Joe Gargery in Great Expectations with equal skill.

Adam Sollis - Front and centre in a thoroughly likable turn as Pip in Great Expectations but also prominent in Realism playing a surly cat and telemarketer with cerebral palsy.

Scott McArdle - The driving force at Murdoch, deservedly winning Theatre Student of the Year, McArdle not only did lighting design, directing, acting, but notably is an excellent and prolific young writer whose three original plays and one musical I saw in 2014 were all high quality.

Again, thank you to all the actors, crew, key creatives and support staff on stage and behind the scenes who made 2014 such an excellent year for theatre in Perth. I'm sure 2015 will be equally stimulating!
Posted by Richard Hyde at 13:46