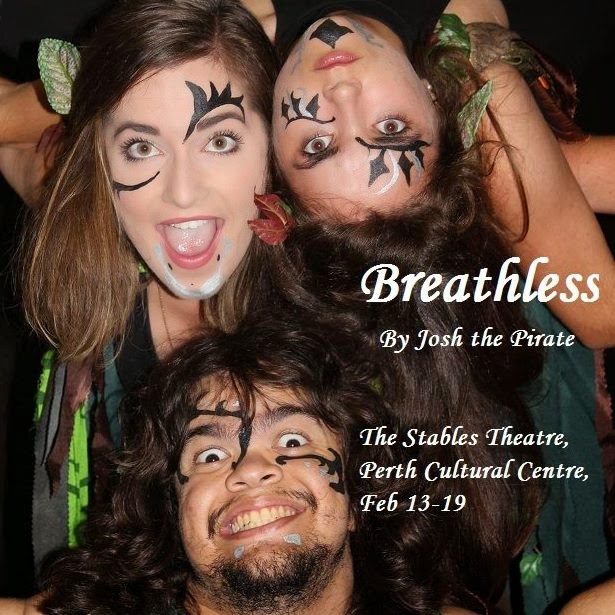 Imagine the Shakespearean comedy A Midsummer Night’s Dream told exclusively from the fairies point of view. Now throw in an eclectic mix of electronic music peppered with some pop standards (Bowie’s Golden Years; Simon & Garfunkel’s Scarborough Fair) and an interpretation largely based on movement and dance with only snippets of the original text via the human lovers and you have Breathless.

This iteration is in fact the further development of a concept that originally saw life last year as Sleepless. Many of the same performers have returned, some in new roles, and the director remains the jauntily named Josh “The Pirate” Walker.

Now, it is certainly true that audience members with more than a passing familiarity with the Shakespeare play will better appreciate the storyline and subtleties here. Those without any knowledge at all might end up a tad confused. There is, however, enough colour and movement and energy for this to be an enjoyable performance piece no matter what your comfort level with The Bard’s (truncated) tale of four lovers who stumble into fairy infested woods is.

And my, what a bunch of mischievous fairies they are! From their King (Oberon) and Queen (Titania) who feud over a lost child; to the magical potion that entreats a person to fall in love with the first creature they see; to the tricks they play on the wandering humans, this is ripe with misunderstanding and fun. Throw in some colourful costuming and makeup and this is quite the frolic.

The performers work well as an ensemble and the energy slowly builds to a frenetic ending. I liked how the lovers are literally the playthings of the fairies though they did have their back to the audience for a disproportionate amount of time. I wanted to see more of the lovers’ faces but it was a minor quibble.

Matthew Randall was a commanding physical presence as Oberon and Angela Donlan (Titania with fairy wings of course!) was certainly a hit with the young girl in the audience who rushed up to her all excited afterwards. Shannon Berry had lovely poise as Helena and Michael Moshos was a devilish Luck. There were times the music was too loud for the dialogue excerpts, however, Keren Schlink, Berry, Owen Lane and Brendan Ellis handled the language well enough.

This is a young cast with a vibrant variation on a classic tale. At a slick 50 minutes it’s a great way to commence an evening at Fringe, beginning at 5.15pm in The Stables, with only three more shows until Thursday 19th February.