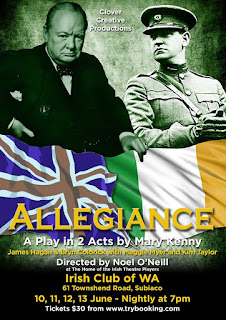 If the heart on any dramatic endeavour is putting rich characters in opposition to one another as they strive to achieve differing goals then Allegiance is a text book example. The play recreates a private meeting between Winston Churchill, at the time the British Colonial Secretary in charge of Ireland, and Irish revolutionary leader Michael Collins to imagine what their conversations might have been as they negotiate the Treaty that will end the Anglo-Irish War of the early 20’s.

Two men fiercely passionate in their beliefs and seemingly at total loggerheads when first we meet them go hammer and tongs until improbably, miraculously, they come to a compromise. That there are real stakes involved as atrocities are recounted from both men’s vastly differing perspectives heightens the drama even more. It is a volatile stew of elements that gives the play its undoubted power and historical relevance.

It also allows James Hagan (Churchill) and Bryn Coldrick (Collins) to inhabit larger than life figures and imbue them with the gamut of emotions as tempers run high and each battle for control of the encounter and the outcome. Hagan has, in many ways, the showier part as Churchill who is full of bluster and rhetorical flourishes as he initially seeks to put Collins in his place. The gruff voice and dogged demeanour is nicely portrayed by Hagan whose projection is exceptional as befits his reputation as a top vocal coach. Coldrick gives Collins a more thoughtful, troubled air and is aided in this by a couple of short scenes where he reads letters to his beloved back in Ireland. Collins is clearly a reluctant participant but both men’s passion and patriotism is unquestioned.

The acting is at its very best when there is a reversal in the predominant façade – the quieter moments of grief and contemplation Hagan allows Churchill; and the explosions of anger as Coldrick lets loose Collins' outrage. These are compelling as they give us insight into both's complexities as they wrestle with such an intractable problem. The play is also at its best when it settles down into exploring the shared humanity of two people who couldn’t possibly have come from (and represent) more fundamentally different points of view – the privileged British Imperialist versus the working class Irish revolutionary.

At the beginning of the play, however, a device is used to convey an abudance of exposition whereby Churchill is dictating to a secretary (Maggie Meyer) and even later when he and Collins first meet there are a lot of dates and events imparted. While the historian in me appreciated the information to get up to speed with the facts it was a little clunky as it felt like the writing was designed for the audience and not organic to the sort of conversations these characters might have. It’s when, especially in a long sequence at the start of the second half, that the men talk about personal experiences – their childhoods and fathers and living in each other’s country for periods of time – that there is a greater ring of truth and this works well.

It’s also critical to the establishment of fledgling trust and understanding so that they can come to their eventual agreement. That breakthrough pivots on a critical scene after boisterous renditions of battle poems and shared tales where Churchill confesses to losing his youngest child. Hagan shows us the cracks of grief and Coldrick responds as the two foes unite in the undoubted tragedy of such a young loss of life. I would have liked Hagan to have perhaps stayed more muted after this as he rebounds to full effect perhaps a tad too quickly but it was a strong turning point. The story itself is wrapped up somewhat conveniently shortly thereafter but it does allow for the sombre coda as we learn that in many ways the agreement cost Collins his life.

As well as Meyer, Kim Taylor adds moments of interruption as Churchill’s manservant with some gentle byplay of haughtiness versus Collins’ scepticism at all the trappings. This is best represented when Churchill offers him a hand-rolled Havana cigar and Collins replies that he would prefer a cigarette. It was a lovely encapsulation of their differences.

This is a fascinating and well-acted two hander that director Noel O’Neill has staged quite simply to allow the force of the character’s personalities and arguments to take the spotlight. Many a time I heard a whispered ‘well said’ or murmurs of approval amongst the audience at the Irish Club, a venue no doubt guaranteed to bring passionate observers of what was a pivotal period in Irish history.

Written by Mary Kenny, Directed by Noel O'Neill and starring James Hagan, Bryn Coldrick, Maggie Meyer and Kim Taylor there is one more performance, 7pm Saturday June 13 at the Irish Club in Subiaco.
Posted by Misadventures in WA Film at 14:02