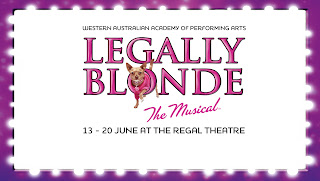 What a trajectory! From 2014’s unexpected gem Children of Eden in the confines of the black box Enright Studio to blowing the roof off the intimate Roundhouse Theatre earlier this year with the superlative Urinetown; this graduating class has moved into the spacious Regal Theatre nary missing a beat. They have done so with no small assistance from their second year colleagues and the many other departments that go into making a high energy spectacle such as Legally Blonde really fly. And oh my goodness, how it flies!

WAAPA’s mid-year musical theatre production has become a highlight of the Perth theatre calendar as they throw their considerable talent and resources – performers, musicians, set designers, costume designers, production department and many others into crafting a professional level experience both for its students and the audience. The results here, as with last year’s West Side Story, are impressive and wildly entertaining.

The set is a dizzying array of trucks and movable components that facilitate such slick and seamless transitions as everything from the law school classroom to Elle’s apartment to ‘the scene of the crime’ are established with precision. As befitting the story and its colourful central character these sets are a glorious confection of bright colours and sleek design. This is enhanced by vibrant lighting and use of back screen projections that really make this a visual feast. Unfortunately there were some technical difficulties and we lost the projections in the second half. After a few moments, however, their absence was hardly noticed such was the infectious energy and sheer pizzazz happening on stage.

The costumes are a riot of colour and style with Kate Thomas as Elle Woods looking simply stunning in a collection of outfits that move from pink to ‘serious’ navy blue and back to pink again as the story progresses. As with any musical the orchestra is a critical component and I’ve witnessed many a show cruelled by a less than stellar effort. Here though, as I’ve come to expect from WAAPA productions, Musical Director/Conductor David King has an exceptional group of musicians at his disposal and they played beautifully. It’s a fun score and their contribution matched the energy and precision on stage. Even though I was sat right behind Mister King the sound balance was spot on and it’s always a pleasure watching the joy and concentration of the musicians up close.

To the performances and Kate Thomas not only looked the part in the lead role of Elle Woods, she was outstanding and received ecstatic applause from both the audience and genuinely appreciative cast mates at final bows. Displaying a lovely singing voice and good comic timing she was in the thick of everything in what is a demanding role. Thomas had great rapport with the rest of the cast but especially Joel Granger as her eventual love interest Emmett and Taryn Ryan as the hilarious hairdressing confidant, Paulette. Fittingly, there is a wonderful moment amongst all the craziness where she is alone on stage and sings the title song with great emotion until Granger joins her. It is a performance that will attract no small attention.

I must confess I didn’t even recognise Ryan until checking the programme at interval. She was fantastic as Paulette bringing a different kind of kooky energy to match Elle’s eccentricities. Her showpiece number Ireland was a highlight as was her ‘bend and snap’ and interaction with the scene stealing Chris Wilcox as Kyle who personified swagger to devastatingly funny effect. Mister Wilcox is perfecting the sly grin after this and his mischievous Officer Lockstock in Urinetown.

Granger brings an underlying sweetness to Emmett which works well as a counterpoint to Callum Sandercock’s cockier Warner who dumps Elle at the start of the show for not being serious enough. Then there’s Matthew Hyde who is making a habit of being the go to authority figure out of this group having played no less than God in Children of Eden and the evil corporate head in Urinetown. Here he is the feared Professor Callahan but there is always a suaveness to his performances that makes his ‘villains’ somehow more compelling. His Blood in the Water is a case in point as another highlight.

But there are so many.

The show gets off to a brilliant start with Omigod You Guys and the female ensemble was in irresistible form setting the playful tone immediately. They are led by the ‘greek chorus’ of Tayla Jarrett, Heather Manley, and Jess Phillippi who bring attitude and sassiness as the voices in Elle’s head. The extended sequence of What You Want seals the deal as a high energy romp that sends us off to Harvard as the story kicks into gear. There, Matilda Moran plays Warner’s new girlfriend Vivienne with bitchy condescension but has a nice arc of her own as the girls eventually stick together and she becomes an unlikely ally.

Megan Kozak, unobtrusive earlier as Kate (headgear and glasses partially disguising her face), explodes into action after the interval as the fitness queen Brooke Wyndham who is accused of murder and whose trial is the key battleground of the second half. In a town where footballers are venerated for their athletic abilities, Kozak and the full ensemble demonstrate the peak physical condition and discipline required for a show like this in an astonishing Whipped Into Shape. The full-tilt choreography of the mass-coordinated skipping with Kozak still having to belt out a song is scary good. Indeed, the choreography by Lisa O’Dea is superb throughout and once again WAAPA demonstrates that they are training their students to be true triple threats in acting, singing and dancing.

Other highlights include the first half closer So Much Better, and the end of the show with Find My Way/Finale as well as the very funny Gay or European where Jacob Dibb and Daniel Ridolfi have a scene stealing moment. It would be remiss of me not to mention the canine stars Peanut and Winston who were crowd favourites even though Winston did a little improvising all on his own as Rufus!

This show really is why I love going to the theatre – high energy, infectiously joyous, and executed with such talent and style as to demand a smile on your face as you watch it. The buzz as the full house filed out was exceptional. I suspect you may find it difficult to snag a ticket as word of mouth will quickly ensure the show is sold out if it isn’t already but this is definitely recommended as a supremely fun night out at the theatre.

Music and Lyrics by Laurence O’Keefe and Nell Benjamin with a Book by Heather Hach, Legally Blonde The Musical is directed by Jason Langley with Musical Direction by David King and Choreography by Lisa O’Dea and stars WAAPA’s third and second year musical theatre students. It runs until 20 June at the Regal theatre in Subiaco.
Posted by Richard Hyde at 11:28