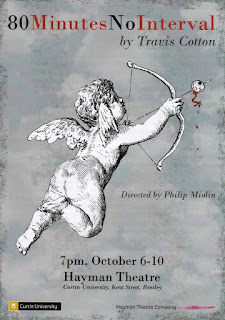 This review has been written by a meticulously constructed algorithm that was inserted into a small, innocuous looking black box. That box was gathered together with other small, black boxes and placed in a front row seat with an excellent view of the stage. The previous owner of this blog, an intermittent writer and more than occasional theatre reviewer, is now trapped in an existential flower store listening to the music of Kylie Minogue and Natalie Imbruglia whilst pondering the significance of the Mamet play Oleanna and the ideal garnish for an evening meal.

Yes, there are several levels of absurdity in writer Travis Cotton's play - a comedy about a failed novelist turned theatre reviewer who simply wants to marry Claire but is thwarted by a professional waiter, his own calamitous culinary curiosity, and the existence of the future of criticism, the aforementioned black box. It does not end well for our hero, Louis, who goes to jail for murder only to contemplate an ill-conceived dalliance in more ways than one on his release.

There is no doubt the play is funny and there are several weird and wonderful characters along the way with plenty of jabs at theatre cliches and a healthy dose of self-awareness. Yet when all is said and done I wasn't quite sure what it all signified after the laughter faded. There are constant references to David Mamet's Oleanna and I was looking for thematic connections that simply didn't appear to be there.

Ultimately the play feels more like the film Adaptation where Donald Kaufman's screenplay takes pre-eminence in the last third skewering the absurdity of the type of Hollywood film Charlie Kaufman would rail against. Yet, apart from a funny button that ends the play, I kept waiting for the grander point or idea. It never came. The mocking of cliches seemed to be the point and that felt a little hollow.

The lead character Louis, played with straight man charm by Kane Parker, bounces from one increasingly absurd situation to the next but to no great end. The opening scene where the Gallic accented waiter (Jeremy Bunny) pleads with him not to propose to Claire (Lauren Beeton) is amusing enough and sets Louis on his way. He wants to prove he can support Claire and finally get one of his manuscripts published. Some of the failed writer turned theatre reviewer observations were nicely acerbic and had me squirming!

The publisher, played with malevolent glee by Tristan McInnes, demands Louis sign on the dotted line but all ends in mock tragedy and our hero is carted off to the big house for twenty years. The jail dance sequence set to Minogue's Can't Get You Out Of My Head is a sight to see - itself seemingly a gag about "interpretive dance".

The final scene at the florist's has its own machinations, again mocking some well worn story devices that litter both film and theatre. It is well set up and paid off but again, not devastating enough a note for mine to end the play on.

Before the show started, Eleanor Davidson was playing the flute, stage right - an eclectic mix that included Summertime and Fly Me To The Moon. That she enters the action as Louis' boss is one of the devices Claire mentions in a long rant about theatre cliches. The introduction of the black box that replaces Louis spins us off into strange territory indeed but that was only the beginning of the weirdness.

Bunny has all kinds of fun as the waiter with an outrageous accent who constantly challenges Louis. Beeton plays Claire with a no nonsense practicality that would scare the hello out of any writer and Caitlin McFeat makes for an earnest florist as Mathilde.

It is entertaining and you will certainly laugh but it felt like it needed another layer to really elevate the material to more than a series of loosely connected, funny scenes.