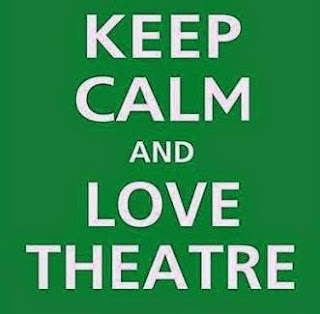 Back in 2014 I decided to go to the theatre. Not that I hadn't before but this time I really decided to go to the theatre. Over a 100 shows. I can't even remember what the catalyst was. Other than I also decided I was going to write about the shows I saw. It was kind of crazy. But there I was, pretty much incognito, paying my own way, hitting the stalls and writing reviews.

At the end of the year I remember thinking, that was fun but probably insane. Better tone it down next year.

Then the Independent Theatre Association (ITA) came a calling and asked me to become an adjudicator for the Robert Finley Awards. Toning it down became over 130 shows last year! Now that WAS insane.

Note to self: Really do need to rein it in, Richard!

Perhaps I need to recheck the definition of 'rein in' and 'tone down' as the whole ease back on the theatre plan didn't seem to be working.

The reality clearly was that I had contracted the theatre bug. The only problem with this diagnosis is that my screenwriting, already under assault from having to return to full-time office work in 2012, had withered on the creative vine. [Insert grovelling and abject apology to key collaborators].

That had started to trouble me as a whole lot of people only knew me as *gasp* a reviewer or even worse, yikes, a critic. I would plaintively reply, but I'm a writer. Except, if you're not regularly writing you're just one of those people (you know the type).

Now though I have a new screenwriting project - a feature film script that I can't really talk about yet but one that has already begun to kick start my creative impulses. So Monday night's show was my swansong as a theatre reviewer.

Which means it's time for some thank yous. Apologies in advance to anybody I forget due to addle-mindedness.

To those people who looked after me in terms of complimentary tickets - Irene Jarzabek from Black Swan; Leigh Brennan from Curtin University; Elisabeth Gjosund from Hunter Communications who unfortunately only discovered me late in the game and I wish I could have seen more shows for; Renato Fabretti from WAYTCo; and independent theatre practitioners who consistently sought me out such as Craig Griffen (Fresh Bred Productions), Karen Francis (Stray Cats Theatre), Scott McArdle (Second Chance Theatre) and Tiffany Barton (Creative Collaborations). Murdoch University with its myriad theatre companies and UWA with UDS were also semi-regular sources for my services.

I'd also like to thank perhaps on the surface a strange category but one that I derived great pleasure from, namely the parents and family members of performers and theatre practitioners. Many times people would know who I was from my reviews and would come up and say hello. It was a delight to see how proud they were of their son and/or daughter and those were always fun conversations. Especially with interstate based parents who would fly in for production weeks notably at WAAPA.

To all the talented writers, performers, directors, stage crew, front of house people and beyond - thank you. The talent base in WA is enormous and it is a considerable pleasure to see genuinely good work being consistently produced in often trying circumstances.

Lastly, thank you to all the readers of the blog. I'd like to think I wrote entertaining and informative reviews that added some insight to the myriad productions on offer at all levels - student, independent, professional, and before I became an adjudicator, community theatre. The feedback I was proudest of was that people would consistently say that my reviews were honest. I called 'em as a saw 'em and perhaps that was a strength coming from a film background, people knew I had no allegiances or vested interests in the theatre world. I simply decided to write about it.

This will be the 242nd post on the blog and there have been a tick over 93,000 page views. Seems like a fair set of metrics to end on.

Only to say this, you'll still me at shows. I love theatre too much to abandon it. I just won't do so with such exuberant frequency or have the time to write reviews. If you buy me a cider after a show though...

You will also hear from me again on this blog for my traditional end of year lists to be published on Boxing Day.

But for now, thank you and fare thee well!