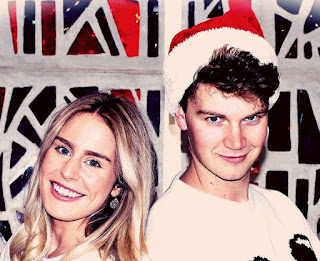 Ah, Christmas. A moment when families come together in the spirit of goodwill and friendship to spend quality time in celebration of whatever their beliefs dictate. A joyous time of bonhomie and inclusion; of catching up with loved ones and relatives perhaps otherwise unseen. But that’s for functional families… and where’s the fun in that?

Brother and sister Bailey (Maverick Newman) and Bonnie (Stacey Thomsett) come from a decidedly dysfunctional family. Their parents are divorced, and Dad seems to go through more girlfriends than a gluttonous uncle gorging himself on the fruit mince pies. Christmas festivities are therefore beset by all sorts of lecherous rellies; family secrets; and a revolving door of wannabe mums.

What better way to cope than to stage a cabaret and sing about the trials of tribulations of their annual Christmas ordeal? Yes, the audience is complicit in this witty and perceptive hour-long cabaret that received a raucous reception upstairs at the Lazy Susan’s Comedy Den.

The Christmas setting is a smart way to explore all sorts of issues – intolerance, whether it be political, sexual, or religious; the stereotyping of gender and age groups; the mocking of family dynamics (and what more stressful setting is there than at Christmas time?); inappropriate behaviour by older men at such gatherings; and generally making fun of sibling rivalry and the oddball characters you might find in any family.

The original songs are clever and pointed in their observations but never shy away from some dark home truths while being hilariously delivered by Newman and Thomsett. And what a combination they are – Thomsett plays Bonnie as a character with a perky disposition whilst seemingly craving acceptance from her brother; while Newman is all faux outrage and confidence as Bailey. With a quick costume change and a couple of glorious wigs, he also plays the guests – 13 year old Maisie (who demands to be called Maz) who sings of her love of an unlikely suitor in Love is Love (Maz’s Lament); and Patricia who’s trying a little stand-up comedy to disastrous effect.

The byplay and stagecraft of the two performers is excellent – the choreography of Newman’s and Thomsett’s movement in the tiny space is slick; the looks and asides all perfectly timed for maximum comedic effect. Then there are the vocals with the two newly minted WAAPA musical theatre graduates equally adept at belting out a gospel tune such as Praise Be; the jaunty opening number Christmas Time; or the standout torch song I Don’t Need a Boyfriend.

It’s a simple set-up with two microphone stands and a keyboard. Both take turns supplying the musical accompaniment with those transitions amusing in themselves. Add some dramatic lighting, notably for the extended sequence of role-played surrogate mum introductions during the defiant I’m Not Gonna Call You Mum; a touch of piped in choral flourishes; and those unruly wigs and you have an effective backdrop to the onstage antics.

The humour can be bruising with quite a few “should I be laughing at this?” moments as you howl with approval. But that’s the strength of the premise – everyone can relate to the bizarre goings on of a family Christmas. Pushing this to extremes only enhances the fun. Throw in some embarrassing call and response confessions that have a perfect payoff from the audience and this is a bawdy, riotous show that is sure to put a smile on the face of even the sternest, bah-humbag Santa hater.
Posted by Richard Hyde at 17:00