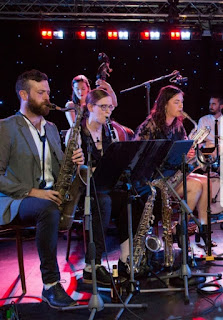 Take a few flights of stairs off Hay Street into the bowels of His Majesty’s Theatre, order a drink, take a seat, close your eyes, and listen.

It’s not hard to imagine you’re in a nightclub in Berlin during the height of the Weimar Republic; or a club in New Orleans pretty much in any decade where jazz reigns supreme; perhaps even watching the Kelly Sisters perform in a dive in Chicago… before, you know, that unfortunate incident.

The music is timeless – the slide of the trombone; the slap of the bass; fingers tinkling the ivories; the wail of a trumpet; the caress of a saxophone; the crispness of a snare. Together, sublime. Music to make you smile, to tap your toes, to sway in time to the beat. Then you add the voices. Playful and sexy, crooning, snarrrrrrrrling, soaring. Music and vocals working in harmony.

The Perth Cabaret Collective band and the talents of Jessie Gordon, Mark Turner, and Cougar Morrison.

An irresistible combination in the packed venue known simply as Downstairs at the Maj. Playing jazz standards and classic songs for almost two hours on an early summer’s night in the city. It doesn’t get much better than this.

Open your eyes and you are presented with a constellation of lights in the backdrop that will pulse and change colour throughout the evening. Illuminating the band, the performers, and the mood.

The sense of timelessness is aided and abetted almost immediately by Jessie Gordon appearing on stage like a movie starlet from Hollywood’s Golden Age. Gorgeous gown; winning smile; all confidence and sass. She works the audience with consummate ease before launching into Ain’t Misbehavin’ that sets the tone for what’s to come. Playful, sexy, and a little bit naughty.

Mark Turner is all suaveness and self-deprecation as he joins his childhood friend onstage. That friendship is immediately discernible in their banter and comfort in the other’s presence. They sing Dream A Little Dream to each other as if there was no one else in the room. An intimacy and authenticity that is compelling to experience. 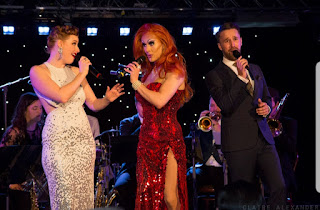 Then throw in the wildcard. The Queen of The Court, Cougar Morrison, who adds a sense of unpredictability and edginess. If it’s possible to upstage Gordon in the fashion stakes then Morrison does so with a battery of sequins, bold accessories, bolder make-up, and more costume changes than a Cher concert. But the lad can hold his own in the singing stakes while cutting a striking figure in a skin-tight gown.

Morrison’s banter is far bawdier and he’s aware that his appearance may unsettle some of the punters. His mischievous “can you smell the fear?” as he prowls through the crowd at the beginning of the second set is priceless. But then so too is the acknowledgement of his parents in the audience and the support they have given him in his chosen career. It’s a touching moment, echoed later as Turner greets his own folks.

The nine-piece band under musical director Jess Herbert is in cracking form. They all get their moments to shine and together they are a rollicking sonic force. The exuberance of their playing is matched by the sheer talent involved. Of particular note is the trumpet playing of Matt Smith and Erin Royer on alto saxophone and clarinet. But they’re all damn good – Herbert on baritone saxophone, Luke Minness on tenor sax, Ricki Malet on 2nd trumpet, Tom Salleo on the trombone, the bass playing of Kate Pass, Tim Voutas adding ‘subtlety’ on piano, with Alex Reid on drums. 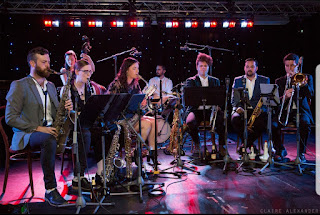 The two set lists are littered with classics that are instantly recognisable. Some of the highlights – the classic St James Infirmary sung by Gordon that had me down in the New Orleans bayous; the slow build of Shake That Thing into a crescendo of vocals and musicianship – when the collective talent on stage is in mass attack mode as they were here then the table and chairs be a vibratin’!

Morrison delighting in rolling more R’s than a hundred Edith Piaf impersonators whilst singing C’est Si Bon. Turner crooning his way through I Get A Kick Out of You and The Way You Look Tonight; the chaos Morrison brought at various points, one of which was a duet with Turner on a retro-fitted Lady Is A Tramp. The trusty crowd-pleaser Mein Herr with Gordon at her cheeky best as she expertly builds to a thumping conclusion with that glorious voice. The instrumental jams such as Climax Rag.

All culminating in Diamonds Are A Girl’s Best Friend, the Moulin Rouge arrangement no less, that would have made Nicole Kidman blush as a now pneumatic Morrison breathed new life into Satine; with an encore of Gordon and Turner, best friends fittingly together, doing Kander and Ebb’s wistful Nowadays.

There are only two more shows of this incarnation, all no doubt sold out. But never fear, the Perth Cabaret Collective will be showcasing an hour-long version at next year’s Fringe in the magical Edith Spiegeltent. On the evidence of this performance it will be one of the hottest tickets in town.

*Images courtesy of Claire Alexander
Posted by Richard Hyde at 15:06