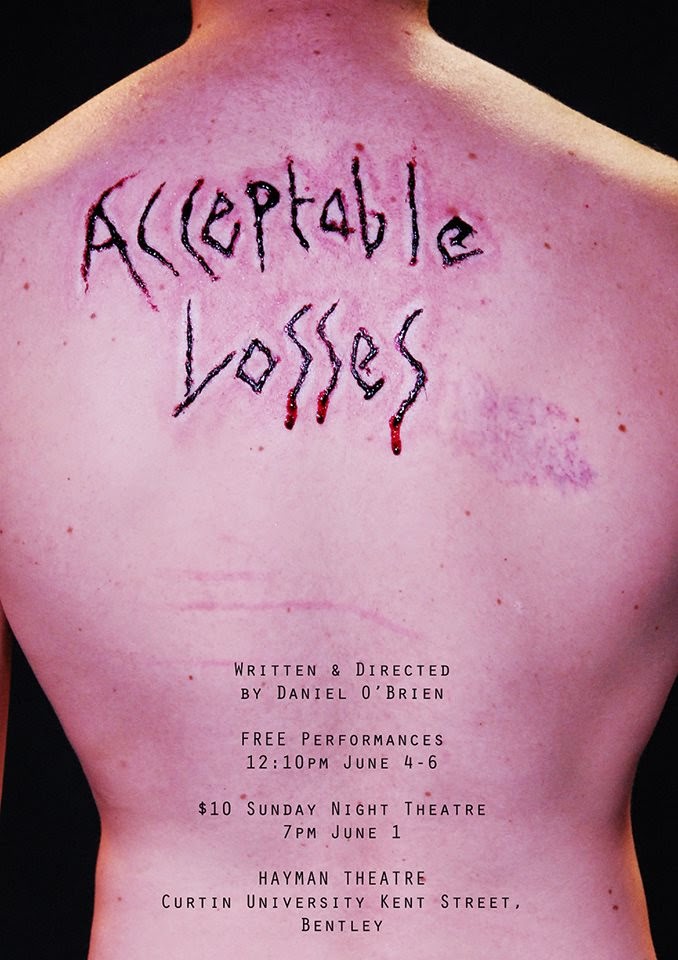 The second play tonight was a scripted piece set in a dystopian future where the Lord Protector (Carlin Monteiro) aided by the Guard Captain (Rachel Foucar) keep the peace in an unnamed city using quite brutal methods. Citizens are rounded up by the Protectorate guards (Jenn Scullion and Dylan Searle) to be experimented on by Doctor Anders (Alexander Gerrans) for the mysterious Project 12.

Things go awry when Anders’ child Millie is kidnapped by unknown forces and his wife Fiona (Beth Tremlett) is implicated. She is tortured by the Guard Captain and eventually manipulated to be the scapegoat as ‘the masses’ have grown restless about the disappearances. Rhiannon Petersen plays the ‘Frankenstein’s monster’ of Project 12 as well as the Judge at Fiona’s sham trial.

Ambitious but uneven, the play sets up a quite atmospheric world especially with the use of sound effects such as thunder, constant rain, the slamming of cell doors; a range of costuming from the Lord Protector’s sleek look in buttoned down vest and wingtip shoes to the uniforms of the guards; and quite graphic violence, Foucar in particular delighting in putting a bit of stick about. The tone is mostly grim except for a curious Droog-like scene by Searle’s guard as he practices pickup lines on Petersen’s inanimate ‘monster’.

Monteiro is all sinister charm as the pre-eminent villain behind it all but Foucar has the far more boisterous performance as the violent Guard Captain. Tremlett is clattered about and bound most of the play but gives a nice performance as the anguished wife concerned for her child. Gerran’s Anders proclaims himself to be a monster - the ‘silent scalpel of the city’ - but I was never convinced this was the case as he seemed impotent in the face of the Protectorate. The play also never addresses who did kidnap Millie so this felt more plot device than anything as I was waiting for the twist that never came.

It is, however, a concept that could be further developed as there are some interesting moral dilemmas thrown up, especially for Tremlett’s character.

Written and Directed by Dan O'Brien with Dramaturgy by Jesse Daniels.
Posted by Richard Hyde at 22:28