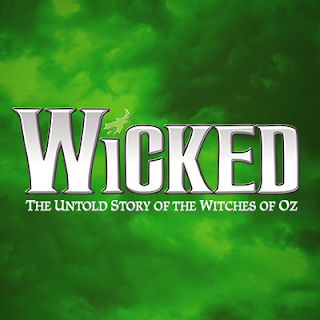 Some thoughts on today's matinee of Wicked at the Crown Theatre, a musical I saw last year in Melbourne:

Jemma Rix is a bonafide star as Elphaba and has a superb voice that is allowed full rein in the first half closer Defying Gravity and was particularly impressive in No Good Deed.

Simon Gallaher was good as the Wizard but this version misses the touch of class Reg Livermore brought to the table over east. Maggie Kirkpatrick was very strong as Madame Morrible though she had to sing-talk her way through songs, thankfully brief and inconsequential. Steve Danielsen is suitably dashing as Fiyero and I very much like Edward Grey as Boq.

The real revelation for me was Suzie Mathers who was excellent as Glinda the Good and on balance I preferred it to Lucy Durack's performance in Melbourne. Mathers held her own vocally, with the duet For Good with Rix being quite touching, and she was very funny. Popular was a standout.

Overall I felt somewhat underwhelmed seeing this for the second time. There is no doubt it is a slick piece of entertainment and looks fantastic with amazing set design, costumes and lighting. The acoustics at Crown though meant it sounded 'thin' to me both in terms of the vocals and orchestra. There's something to those delightful old theatres in Melbourne that seem to allow for a much richer aural experience.

I think the main issue is that when I saw it last year I had no idea what to expect and while the book is quite clever in parts, its mysteries were now known and didn't have the same impact. Without that initial wonder it lost some of its magic. For example, this time I was watching to see how certain things were done instead of being wowed by the effects especially at the end of the first half.

I also have to say, that while I bought the original cast recording last year, the ratio of truly memorable songs is light on compared to something like Spring Awakening and certainly Les Miserables, the last big musical to occupy the Crown Theatre.

However, I would definitely recommend Wicked to people who have never seen it before and it undoubtedly remains a popular production that will draw people back to see the story of Glinda the Good and how Elphaba became the Wicked Witch of the West.
Posted by Richard Hyde at 18:26