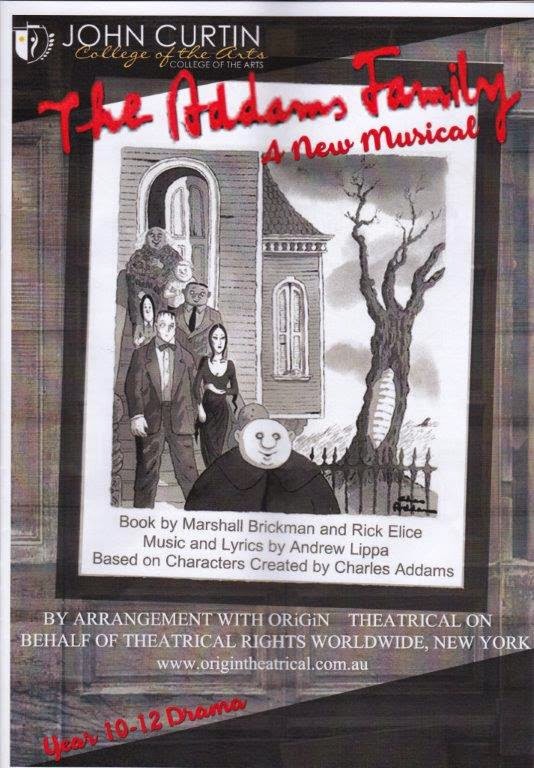 The lights go down. The stage curtains are closed. The band plays the instantly recognisable Addams Family theme from the television show. Then this happens - large numbers of the audience are clicking their fingers at the appropriate points with perfect timing. It was really cool.

Then those curtains opened and cool turned into “Wow!”

For a high school production the level of detail in the set, costuming and makeup was quite extraordinary. Let’s start with the multi-level set with wings that folded in to represent the outside world with suitably happy murals. The inside of the Addams mansion, however, had wonderfully kooky décor and props, from the implements of torture and death Gomez collects to other bizarre items hanging on the walls.

The band was situated on the middle level and from my vantage point in the front row you could see, through the cobwebs, Musical Director Lochlan Brown on the piano with his back to us. Stairs led down to the main stage area and when the curtains opened the cast was sat there in a variety of distinctive costumes from the white of the ensemble to the darker hues of the family itself. The makeup was outstanding as well so the effect was striking from the opening moment. They then all burst into When You’re an Addams with such great energy that it was simply an inspired opening.

What follows is a very funny satire on family values, love and normality as the dark minded Wednesday (Jitana Jamieson) has fallen for Lucas (Johannes Kornberger), a boy from Ohio, causing all kinds of friction as Gomez (Kai Arbuckle) seeks to conceal the fact from his wife Morticia (Kira-Che Heelan) as Lucas’ family arrive for dinner. Pugsley (Albert Elton) fears his sister will no longer torture him now she has found, gasp, happiness and seeks to sabotage the union while Uncle Fester (Ethan Burke) has a far more romantic viewpoint. Lurch, Thing, and Grandmama with her potions are other immediately familiar characters.

I should mention that there is a rotating cast list during the four performance run so the principals are alternated from show to show which makes the whole endeavour even more impressive.

Arbuckle was terrific as Gomez with his pinstriped suit and thick Spanish accent. His comedy work was a highlight as he tries to mollify his wife and keep the family peace while dealing with Lucas’ parents Mal (Finn Pal) and Alice (Jessica Dalwood). The willowy Heelan towers over him and is resplendent in a black wig and elegant, black costume. They work well together and her character’s reaction to Gomez keeping a secret from her is a pivotal story development and thematic beat. Their tango is a lovely moment as is her eventual thawing as Morticia finally accepts her daughter’s decision to wed.

Jamieson gives an assured performance as Wednesday and it’s a lovely subversion of the usual boy meets girl story as Lucas proves his love by his willingness to actually die by her hands. Jamieson also has many featured songs and it’s here we need to talk about the musical aspect of proceedings.

Firstly, the band of Brown (piano), Steve Richter (drums), James Chong (percussion), Phillip Waldron (bass), Rachael Aquilina (violin), Scott Collinson (wind) and Brody Linke (trumpet) is terrific. The sound balance was excellent and their playing is a highlight. The cast, however, are not trained singers and this is readily apparent (with the notable exception of the student who belted out a lovely interruption during Let’s Not Talk About Anything Else But Love). Some get by, like Arbuckle, with a sing-talk approach, while the full company adds moments of support but most cast members struggle somewhat when featured.

Let me say this though, all of them like Jamieson, Heelan, Dalwood and Burke commit totally to their songs and that is most admirable. It all still works as a musical because of the energy and enthusiasm they bring. There are also moments where the lack of singing prowess is played up for comic effect such as when Fester literally howls at the Moon or Lurch unexpectedly launches into a growly song. The most effective featured song for me was Elton’s What If? that had a nice poignancy to it while Full Disclosure that closes the first act was good fun with the whole company involved.

Back to the performances and Ethan Burke was the standout as Fester pretty much stealing every scene he’s in and acting as a faux narrator at times. His The Moon and Me where he serenades the Moon (Ella Norton) with the ensemble using a mix of white and black parasols was another highlight. He gave Fester a manic energy but also a sweetness when it came to matters of the heart that was compelling. Toto De Waele, with platform shoes to accentuate his height, was a most amusing Lurch while Lily Philp had some funny moments as Grandmama.

Dalwood played Alice’s arc from uptight wife to potion infused independent woman nicely with some great snark as the latter. I was also very impressed with Kirsty Clarke as Ophelia who glided across the stage exhibiting very elegant ballet skills accompanied by Julian Monck as her dance partner.

There were lots of other great moments including a tap dance from one of the female ensemble; violin and cello work from Meredith Jackson and Eleanor Campbell; and a diabolical chair prop that had me squirming! The lighting was again very well done throughout which enhanced the costumes and makeup to great effect.

This is deliciously dark and kooky with full throated performances and nothing short of impressive staging and presentation. Directed with flair by Fiona Tholet from a Book by Marshall Brickman and Rick Elice, with Music and Lyrics by Andrew Lippa there are two more performances on Saturday 2 May at John Curtin College of the Arts in Fremantle.
Posted by Richard Hyde at 13:09