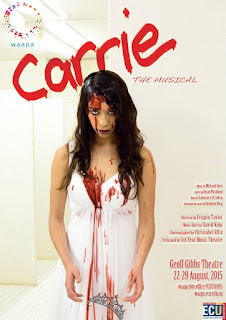 I went along to see the 2015 graduating class’s final musical on Monday night with a mix of curiosity and some trepidation. I was intrigued to see how certain elements, particularly the telekinesis, would be staged as well as the infamous climax. Then there was the knowledge that in its original incarnation Carrie the Musical was a notorious flop. It seemed such an odd choice to close out the year for this group of very talented musical theatre performers.

The results were mixed. The talent on display was in no doubt. This graduating class has swept all before it and has been outstanding in their two previous outings in 2015. The writing and construction of the musical itself, well, that’s a different story. I reminded myself of Stephen King’s tale by watching the remake of Brian De Palma’s classic horror movie starring Chloe Moretz as the bullied teenager with telekinetic powers and Julianne Moore as her fanatically religious mother. It’s quite a slow burn narrative that relentlessly builds towards the bloody finale as Carrie wreaks retribution on those who have humiliated her at the school prom.

It’s here where the musical form and the horror genre seem at odds. Carrie White and her mother are, in many ways, quite impenetrable characters; the former so withdrawn and repressed she doesn’t even know her own body; the latter, gripped by irrational fears and the horror of everyday life. The musical though attempts to do what musicals do so well – give their characters an emotional life and expose their internal monologues through song. In Carrie’s first number she sings about her hopes and dreams; mother and daughter share an early duet where Margaret White expresses her love for her daughter; other characters reveal motivations and fears and feelings in song.

This totally undercuts any tension as, while not sympathetic, they come across as, well, at least understandable. A mother, as misguided as she is, wanting to protect her child; a loner considered a freak who only wants to fit in and be loved. It’s all too explicit whereas in film it’s all in the eyes and facial expressions as we watch the reactions to the unfolding calamity. Here it felt like the typical ugly duckling turning into a beautiful swan story… with a bit of mayhem tacked on at the end.

Of course, the other element a stage musical cannot replicate is the special effects. Carrie’s growing understanding of her powers and the display of that ability is somewhat perfunctory. The songs themselves are not overly memorable and the score feels like it wants to be a rock musical but doesn’t really commit to that goal. But enough of the failings of the Book, Music and Lyrics, let’s talk about the performance itself.

What strikes you above all is the outstanding vocal ability of this class. Heather Manley has a superb voice and is a warm presence as Carrie. That in itself is problematic as she flashes a stunning smile and sings about all the things a normal teenage girl longs for – acceptance, a handsome beau, a special evening at the biggest social event of the year, love. No amount of dowdy costuming can hide that eminently watchable quality so her transformation into the belle of the ball is hardly unexpected. It’s difficult to find the freak here as her featured songs are too revealing and too well sung. There are flashes of steel as the character confronts her mother and occasionally her tormentors before Carrie White’s horrific vengeance is unleashed. Manley makes for a memorable sight after being doused by a bucket of (fake) pig’s blood which was perfectly executed on the night.

Matilda Moran has perhaps the most difficult role as the devoutly religious mother who has sheltered her daughter so completely that it would make Wendla Bergmann blush. The attempt in Margaret White’s early songs to make her ‘relatable’ works totally against the nominally scary aspects that come later. Moran also has to deal with some overly convoluted lyrics but shows a fine voice when given the chance with more ballad style numbers that aren’t trying to cram a whole lot of exposition into the lyrics.

Tayla Jarrett plays popular girl Sue Snell who has a change of heart after initially mocking Carrie to be an ally of sorts though Sue’s decisions ultimately lead to the disaster that happens. Jarret also has faux narrator duties as she is ‘interrogated’ periodically in a device designed to get us into the story proper. As the sole survivor she gives a little bit of snark to her unseen questioner and also stands up to Jess Phillippi’s bitchy Chris whose belligerence is another catalyst for the climax.

Phillippi is all attitude and strut as she plots her own vengeance but sadly the character largely vanishes in the second act which robs the show of much needed energy and narrative propulsion. The character’s boyfriend, Billy, played with malevolent charm by Daniel Ridolfi is also unfortunately sidelined for large stretches.

By comparison Sue’s boyfriend Tommy, played by Morgan Palmer, is genuinely charming as he draws Carrie out of herself. Palmer has a showcase moment in what was shaping as quite a corny scene until Tommy’s attempt at poetry bursts into song with a sweet clarity that was as unexpected as it was welcome. Rosabelle Elliott gives the gym teacher Miss Gardner a mix of sternness and concern while Harry Prouse added some goofy humour as the Principal and Reverend Bliss.

The ensemble, as I’ve come to expect with WAAPA shows, was great and all had small moments to shine but really don’t have that much to do here. Some of the choreography also felt (intentionally?) cheesy at times especially coming from a group that crushed Urinetown and Legally Blonde with such ferocity. As always, the orchestra under David King played well and the staging and lighting was well handled.

It’s an odd show and it often felt as if I was watching a weirdly perverted version of the religious elements of Children of Eden mashed together with the school style hijinks of Legally Blonde. If only the biting satire of Urinetown was part of that concoction. While it doesn’t work as a coherent production it does give us yet another glimpse of the enormous talent in the 2015 class. Speed on Showcase!

Music by Michael Gore, Lyrics by Dean Pitchford, Book by Lawrence D. Cohen based on the Stephen King novel, Carrie The Musical is directed by Crispin Taylor with Musical Director David King and stars WAAPA’s third year musical theatre students. It is on at the Geoff Gibbs Theatre until 29 August.
Posted by Richard Hyde at 18:26