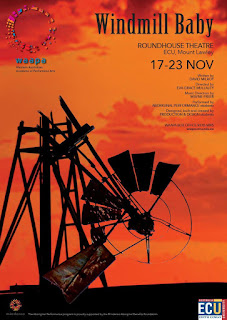 For a venue that is difficult to light, boy oh boy, when they get it right it is a sight to see in my favourite theatre in Perth, The Roundhouse on the ECU Mount Lawley campus. The abandoned cattle station of yore comes to life as memories, both joyful and tragic, are re-enacted in the harsh glare of the desert sun or softer hues of evening relief. At one point audience members on my right visibly jumped as the elements were brought vividly into existence with lighting and sound. Excellent work by lighting and sound designers Jackson McKay and Ella Portwine respectively.

The set itself, designed by Kara Rousseau, is glorious – all corrugated iron with the windmill looming over everything, a water tank, the back verandah to the homestead and an old-fashioned washing line. Curiously though, the featured structure of the title is more a silent observer, oft referred to but mostly ignored by the characters that are summoned by the storytelling gifts of Old May May (Abby Richards).

It is the verandah that is the more potent symbol as the boundary between the privileged station owners - Boss (Quaid Cooper) and his Missus (Nomi Haji-Ahmad) – and the indigenous station hands who do all the hard, manual labour. That one of those hands, the crippled Wunman (Jye Skinner) dares to cross into that space is the catalyst for most of the tragedy that follows.

But there is also, and predominantly, great warmth and humour in the storytelling driven by the wonderfully generous performance by Richards as the older woman who revisits the setting of her youth. It’s like sitting down to hear a great yarn full of diversions, episodic tales, reminiscences, and self-deprecating humour. There’s even some bawdy moments thrown in, mainly to do with Malvern (Lachlan Stokes), the once beau in May May’s life. Then there’s a charming strand about a half-dingo dog and a poodle that is thematically on point but also laugh out loud funny.

As Old May May’s memories take hold, Young May May, played with great expressiveness by Marlanie Haerewa, proves to be the ideal foil. The cutting between past and present is well crafted and enchanting to watch. Serena-May Brown as Sally, apart from being a dab hand on the ukulele, also brings a decency to her role as a rival for Malvern’s interest. She has a featured moment pulling an audience member up on stage to tell a story to that ends in a surprise gift.

Stokes is amusingly naïve when it comes to the female attention Malvern receives and I confess I missed his presence somewhat in the latter stages. Skinner gives Wunman a sly sense of humour as well as providing physical comedy by way of navigating his crippled limbs. His fate felt somewhat anti-climactic though given the fault-lines his relationship with Missus causes.

Cooper has perhaps the most onerous task playing the callous station owner who thinks little of his workers and perhaps even less of his wife. The retribution for crossing racial divides is harsh and unforgiving. Haji-Ahmad radiates a sense of propriety and goodness as the Missus in opposition to her husband’s cruelty.

Torika Forrester seems to act somewhat as a portent of doom as Aunty Darbella while Umima Shah-Munro rounds out the cast as Wunman’s Mum and in ensemble moments. Like with all great tales there’s some singing, a little dancing, and even a bit of puppetry. Director Eva Grace Mullaley uses the full extent of the thrust stage well letting the characters of the past swirl around her central storyteller.

At a smidge over an hour in length this was charming storytelling even in its moments of sorrow, anchored by Richards’ warm delivery and that fabulous set. A most pleasurable evening of theatre presented by the Aboriginal Performance students.
Posted by Richard Hyde at 20:46