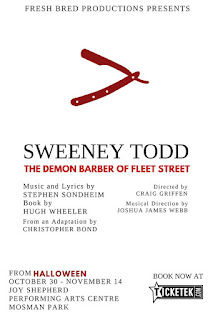 What a way to spend Halloween night – attending a production dripped in revenge and obsession where a “demon barber” slits the throat of unsuspecting customers who end up being the filler for meat pies! Of course, this gruesome tale is blessed by the sublime music and lyrical dexterity of Stephen Sondheim with a dark-hued book by Hugh Wheeler.

My first impressions as I wandered into the venue were, “what a spectacular theatre!” quickly followed by “what a cast!” as I looked through the programme. Indeed, St. Hilda’s Joy Shepherd Performing Arts Centre is a wonderfully appointed 940 seat theatre with all the mod cons – large performance space, orchestra pit, immaculate seating, all the high-tech gadgets, and beautiful lobby and facilities. It was impressive in every way.

As is the cast director Craig Griffen has assembled. I was immediately encouraged on seeing Ian Cross’s name - the standout in a recent production of Oklahoma! - in the lead role. His Jud from that musical was also a dark, tormented character whom he played with great intensity and menace. He excels here with another tightly coiled turn as the eponymous character showcasing a powerful voice and bringing a fierce energy and gruffness to the role. This is occasionally leavened by a softer approach in regard to Todd’s daughter, Johanna (Madeline Crofts), and a vein of jet black humour with his landlady and partner in crime, Mrs. Lovett (Elethea Sartorelli).

Sartorelli, who won a Finley Award last year for a supporting role in the musical Xanadu, is the perfect foil to Cross. Her Mrs. Lovett is cheekily amoral yet caring when it comes to young Tobias (Pete Martis). She sings beautifully, Cockney accent and all, and brings so much black humour to proceedings. Cross and Sartorelli work well together, the first act closer, A Little Priest, a highlight as they gleefully cavort while singing the gloriously mischievous song replete with trademark Sondheim wit and wordplay.

Michael MacCuish, who was good in a non-singing role in Spring Awakening, reveals a tremendous voice as Anthony, the sweetness of which works well in counterpoint to Cross. I enjoyed the sincerity he gives the love-struck sailor, another contrast to all the duplicity swirling around the character. Crofts displays yet another standout voice with Green Finch and Linnet Bird an early highlight as she stands perched upon a step ladder like a beautiful, fragile bird herself. Again, another pairing that works well with Kiss Me a memorable moment that is reprised in snippets throughout.

Martis plays Tobias with suitable naivety until the character stumbles upon the truth leading to an escalation of events. His Not While I’m Around with Sartorelli is quite effecting as the bleak subtext of the moment cuts right through the sweetness of the ballad. This is where Sondheim’s genius lies – another gorgeous song, Johanna, is sung so earnestly while Sweeney is dispatching men with his razor. The jarring contrast of lyrics and music with the brutal actions onstage makes such sequences layered and compelling.

It’s fair to say every character is well cast with singing ability at the forefront. Kimberley Harris makes for an ultimately tragic Beggar Woman who gives some cackling cheek as she intersects with various characters along the journey. Another strong voice, her warning cries in song become increasingly desperate as events spiral out of control.

Cal Silberstein is carving out quite a niche with memorable, comic inspired characters. Here it is with Adolfo Pirelli whom Todd bests in a shaving competition and ultimately condemns to the meat grinder of the bakehouse. There’s a mischievous attitude about Silberstein’s performances that make them stand out no matter how brief.

Rounding out the principal cast is Simon Brett who gives Judge Turpin a creepy, obsessive air of his own and has a showpiece moment of self-flagellation in Johanna: Mea Culpa; Daniel Kirkby as Beadle Bamford who joins in the fun with Parlor Songs on the “partly singed harmonium”; while Thomas Owen is briefly featured as a doctor in the asylum where Judge Turpin hides his beloved Johanna whom he intends to marry despite her being considerably younger and his ward. There really are some disturbing aspects to this story beyond the murders!

The Ensemble is also in very fine voice as they reprise The Ballad of Sweeney Todd throughout and act as silent witnesses to events or incidental characters such as the asylum inmates. They are: Stee Andrews, Rebecca Cole, Jordan Dunne, Olivia Everett, Jackson Griggs, Crystal Haig, Niamh Nichols, Emily Semple, Shannon Whyte, Sam Widenbar, and Lauren Kingham.

Then there is the nine piece orchestra under conductor Joshua James Webb who play the challenging and exceptional score extremely well. From the opening Organ Prelude they are in fine form and the sound balance is spot on between performers and musicians. Indeed the sound design is excellent for such a large venue. I overheard Webb’s mentor talking to the director after the show and he was effusive in his praise of the musical quality. There is no doubt this is a superbly sung and played production. Well done Simone Bishop, Ben Hogan, Tadgh Pedder, Krista Low, Andrea Sitas, Blake Howieson, Laura Halligan, Tahlia Denn, and Ben Albert.

To the staging and the set is quite sparse with a lot of use of smoke and haze effects. This gives great atmosphere with the lighting often used to cast the performers in partial shadow to add to the eerie tone. I did have some quibbles – the use of scene locations – for example ‘Mrs. Lovett’s Pie Shop’ or ‘Sweeney Todd’s Tonsorial Parlor’ on large white sheets that descended into place tended to undercut the unsettling tone as they felt too obvious. This was also the case with the ‘19th Century London’ that unfurled at the start of the show to some mirth. These struck me as redundant as the spaces were clearly delineated by the props and the performances themselves.

It also felt a curious choice when the impressive lighting array was lowered to just above head height at the start of the show for one of the ensemble to literally ‘plug things in’ after which it would rise and descend for various scenes. This was a little distracting as if too eager to show off the technology but after a while settled down to a more traditional configuration.

In all, this is a fine production of a tremendous piece of musical theatre. I understand months of preparation and rehearsal have gone into making this show a reality and it shows. Congratulations to all involved on taking a risk with such a huge undertaking for independent theatre and pulling it off.


Sweeney Todd: The Demon Barber of Fleet Street is directed by Craig Griffen with Musical Direction by Joshua James Webb from a Book by Hugh Wheeler; Music and Lyrics by Stephen Sondheim and is on at the Joy Shepherd Performing Arts Centre in Mosman Park next Friday and Saturday the 6-7th November.
Posted by Richard Hyde at 15:25