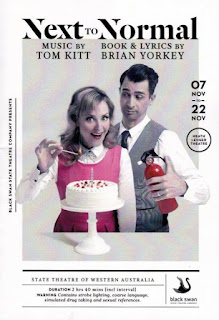 2015 is proving to be quite the stellar year for musical theatre in Perth. One of the reasons is productions that tackle subject matters and themes you wouldn't immediately associate with the genre - shows such as Urinetown (pungent dystopian satire), Spring Awakening (repressed teenage sexuality), Assassins (killing US presidents!) - and now a rock musical about bipolar disorder and its effects on a family. I attended the third and final preview.

Next to Normal stands out for the fact that its subject matter is challenging and under-serviced, certainly in musical theatre form. It demands that the acting from the performers is as good, if not better, than the singing requirements. The cast here deliver in spades with a potent mix of excellent songs, a great score, and a fully formed narrative arc for its central character that is as harrowing as it is gut wrenching. It is clear why this is one of only a few musicals to have won a Pulitzer Prize for Drama.

That lead character is Diana Goodman; wife, mother, and a woman struggling to cope with bipolar disorder. Rachael Beck is superb as Diana bringing impressive acting chops and a wonderfully clear and expressive singing voice to the table. It's a role that necessitates incredible highs and devastating lows and Beck embraces that range with skill, nuance, and incredible stage presence. You simply can't take your eyes off her - she is at the centre of everything - and Beck elicits such a strong emotional response from the audience. The songs deepen our understanding of that emotional landscape and are delivered in style, whether plaintive and heartbreaking; playfully raunchy; or full on angst. There is also humour and hope to be found here and it's well calibrated in that regard.

Medical treatment for bipolar comes under the microscope as the suburban housewife is forced to suffer varying forms of medication and procedures that take away her fundamental essence; her sense of who she is, good and bad. It also fails to address the possible underlying cause of her mental state as some memories cannot be erased by modern medicine no matter how invasive and powerful. You can only feel but empathy for the character as the writing and Beck's performance is first rate.

Diana's condition impacts those closest to her - husband Dan (Brendan Hanson), daughter Natalie (Shannen Alyce), and son Gabe (James Bell). Natalie has a new boyfriend, the stoner Henry (Joel Horwood), while Diana is being treated by Drs. Madden and Fine (both played by Michael Cormick). A total cast of only six and what a cast it is. Acting and vocal talent across the board is exceptional with everyone given their moment to shine.

Hanson has perhaps the most difficult role - Dan is described by Diana as stolid, steadfast, solid and stoic. In the early going his was the one character in danger of verging into caricature. But as the show progressed and Dan is forced to make increasingly difficult decisions regarding his wife that smoothed itself out until Hanson delivers a devastating punctuation point (I Am the One - Reprise) in the aftermath of Diana's final choice.

One of the highlights was seeing 2014 WAAPA graduates Alyce and Horwood in their first Black Swan production. They worked so well together (Perfect For You, Hey #1-3) and sang beautifully. Horwood gave Henry a sweet naivety and charm while showcasing an excellent voice. Alyce played the studious daughter who rebels in the face of the family issues aided by Henry's more carefree influence with a believable forthrightness that was compelling. There is a moment when she is onstage with Beck performing Everything where you see the consummate present and the bright future side by side that had me grinning in appreciation.

Cormick is memorable as especially Dr. Madden when Diana's fantasies are occasionally brought to life with a shot of rock 'n' roll style voltage. He has a powerful voice and an authoritative stage presence that matches Beck blow for blow as they duel both in acting sequences and numbers such as Didn't I See This Movie? with ECT looming.

The other standout for me though was James Bell as Gabe. It's the relationship between Diana and Gabe that is the heartbeat of this piece and Bell is simply electrifying. Gabe's presence carries so much emotional heft and Bell attacks the role with such energy that his impact is undeniable. Another tremendous vocal talent, his performance and its ramifications are pivotal to making this fly.

Another aspect, of course, is the music and I was curious to see how this would work in the Heath Ledger Theatre. I now know that there is in fact an orchestra pit and the sound balance and quality was excellent. The six piece band under Musical Director David Young (also on Keyboards) played very well. The show took off in a sequence of songs where it all clicked as a rock musical - I Am the One, Superboy and the Invisible Girl, Open Your Eyes and I'm Alive. It felt like a clear change of gears as the energy level ramped up but more than that I suddenly discovered 'the voice' of the piece. From then on I was all in.

Musical highlights abound but special mention to I Dreamed A Dance and How Could I Ever Forget?, two stunning sequences that fuse lyrics, music, direction and performance for maximum emotional impact. Only one criticism - given the quality of the songs it was disappointing they were not listed in the programme; an all too often and baffling omission for musicals.

Wisely, given the more intimate nature of the show, Set Designer Bruce McKinven halved the depth of the spacious stage space with curtains forming a 'back wall' for most of the production. There was a central revolve with an outer rim that rotated independently as well which director Adam Mitchell used to great effect. The main piece of set on the central revolve was a large wood-panelled block where the panels opened on each side to depict everything from kitchen sink to toilet to bathroom vanity.

Scene transitions were slick as the revolves ensured the pace never flagged. Lighting design by Trent Suidgeest was evocative and well judged while the sound design by Ben Collins was the best I've heard at this venue; the only minor quibble being that Hanson's microphone volume was noticeably lower in the early scenes but this was soon corrected.

This is an excellent production with everybody at the top of their game, on stage, in the orchestra pit and behind the scenes. Directed by Adam Mitchell with Music by Tom Kitt, Book and Lyrics by Brian Yorkey, Musical Direction by David Young and starring Shannen Alyce, Rachael Beck, James Bell, Michael Cormick, Brendan Hanson and Joel Horwood; with Young on Keyboards, Michael Perkins (Drums/Percussion), Shane Pooley (Bass), Andrew Weir (Guitar), Brian Kruger (Violin) and Laura McGorgan (Cello), Next to Normal is a must see and is on at the State Theatre Centre until 22 November.
Posted by Richard Hyde at 22:58