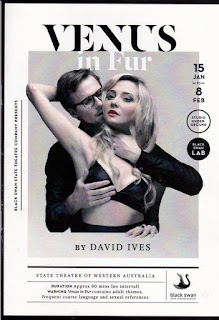 One of the most pleasing aspects of this year's list of top ten plays is that it features original writing by five local playwrights - Tiffany Barton (Metalhead), Scott McArdle (Between Solar Systems), Tyler Jacob Jones (F**k Decaf), Will O'Mahony (The Mars Project), and Gita Bezard (In A Bony Embrace) with another entry by Australian playwright Finegan Kruckemeyer. That is an outstanding crop of talent that augurs well for the future of locally generated stories. And what a diverse mix of entries we have this year ranging from searing dramas to witty observational comedies to a genre rarely seen on stage, science fiction. It also includes a genuine out of the box surprise that demonstrates the power of theatre to heal and transform.

1. Venus in Fur (Black Swan State Theatre Company)
The year started with a bang as this two-hander introduced 2014 WAAPA graduate Felicity McKay to the world in a brilliant professional debut.

"Venus in Fur is a cleverly written play that allows two talented actors to inhabit multiple personas in a provocative, insightful and funny exploration of a subject matter many consider taboo. It is a great start to the theatre season and the upcoming Fringe Festival of which it’s a part."

2. A Midsummer Night's Dream (Acacia Prison & The Actors Workshop)
A stunning theatrical experience that saw prisoners tackle Shakespeare's beloved comedy under the tutelage of Nichola Renton. An event that will not be quickly forgotten by all involved.

"These men, almost all with no previous acting experience of any kind, flung themselves at this with energy, with style, with commitment, and with their own sense of humour and spirit. It was raw, it was powerful, and it was bloody well funny as all get out."

3. All My Sons (WAAPA)
The intimate Roundhouse Theatre provided the perfect venue for the powerful Arthur Miller play, grounded by Brittany Morel superbly playing a woman three times her age.

"This is a carefully and expertly constructed play that really packs a wallop. I admit I was quite moved by the breadth of the Greek-like tragedy that unfolds. It is very well acted with Morel’s performance in particular a highlight."

4. Metalhead (Creative Collaborations)
I caught this play on a night when the entire cast was "on" and what a treat it was to see them go hammer and tongs at each other in such a harrowing drama.

"... I liked that this was a full tilt performance in every aspect – writing, performance, and staging. This was in your face and unapologetically brutal in spots. There were moments when the audience sat in stunned collective silence as the tension built."

5. Macbeth (WAAPA)
A modern interpretation of the Shakespeare classic that was an excellent showcase of all the disciplines WAAPA trains their students in, not only performance but the many departments that make a production come to life.

"All these elements gave the production great atmosphere and allowed for seamless scene transitions - this fairly hummed along. Having said that there were times, especially involving the witches, where there was a languid, at times hypnotic pace within a scene that was mesmerising."

6. Those Who Fall In Love Like Anchors Dropped Upon The Ocean Floor (Fringe World)
Delightfully performed, written and staged this was an inventive rumination on how the passage of time affects and informs our memories.

"I can see why Anchors did so well at last year’s Blue Room awards and I am glad I had a chance to see it after missing out on its 2014 run. It has an evocative and poetic script by Finegan Kruckemeyer that was well directed by Adam Mitchell and superbly handled by its cast."

7. Between Solar Systems (Second Chance Theatre)
The professional debut production for writer-director-actor-lighting designer Scott McArdle whose team transformed the Blue Room studio space into the interior of a spaceship to outstanding effect.

"To tackle a woefully under-represented genre for your first professional outing and to pull it off with such style and clarity is nothing short of amazing. Yet it doesn't surprise me in the slightest."

8. F**k Decaf (The Cutting Room Floor)
A well acted two-hander featuring a witty and insightful script by Tyler Jacob Jones that was funny and hugely entertaining in the small Frisk Bar space.

"My inescapable conclusion at the end of the performance was that a smart, well written script in the hands of (two) talented actors is a recipe for an excellent evening of theatre."

9. The Mars Project (WAAPA)
A sprawling original work that had to accommodate some 18 of the graduating acting class, this showcased a love of language that was immensely satisfying and built to a devastating final scene.

"The play started a little slowly but developed into an intriguing concept that really kicked into something quite special when the turning point comes. This was delivered with clinical precision as Harris’ Wren pivots the stakes into the stratosphere with a simple question with awful ramifications."

10. In A Bony Embrace (Curtin's Performance Studies & Hayman Theatre Company)
The last play I saw in 2015 and an absolute treat. This was another ensemble piece that was off-beat and funny with a great student cast.

"This was a very well written, acted, directed and presented play with plenty of laughs befitting its sitcom DNA. I have seen plays before that didn’t seem to realise they were actually a sitcom and therefore failed but In A Bony Embrace knows exactly what it is and is expertly executed."

Having only graduated the previous November, McKay burst onto the scene in January with a sassy and bold performance that was utterly compelling as she slid in and out of various personas with consummate skill.

Male Performer of the Year - Clarence Ryan
One of the nicest guys you will ever meet, Ryan's performance in Metalhead was terrifying as he inhabited a character full of coiled anger and aggression. It was a brutally physical portrayal that was haunting.

Ben Mortley - While adeptly handling many diverse roles in 'Anchors' it was the heartfelt monologue explaining why his character was only now going on a first date that was a quiet highlight.

Gemma Cavoli - A nuanced performance that builds to another devastating conclusion in the hour long monologue of The List.

Brittany Morel - The physical representation of a much older woman was excellent as is the change from deluded character to something far more potent.

Zoe Street - A standout in the at times surreal Melancholy Play, the Curtin University student gave her character a fascinating world weariness that was poetic and languid.

Elle Harris - As The Mars Project slowly unfolds, Harris becomes the presumptive lead who skillfully handles a complex arc that leads to an emotionally explosive climax.

There you have it. As always, thank you to all the performers, writers, directors, crew, front-of-house, technical and design staff for another excellent year of theatre.
Posted by Richard Hyde at 12:35