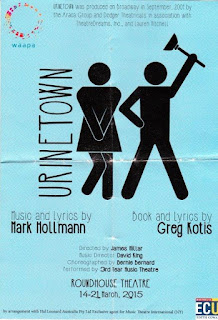 It was an outstanding year for musicals and cabaret in 2015. From big touring productions such as Les Miserables and Wicked to the continued excellence of WAAPA's world class music theatre course there have been many tremendous shows. This has been supported by independent companies such as Stray Cats Theatre Company and Fresh Bred Productions who are mounting big productions catering to different audiences. Black Swan even got in on the act this year with the rock musical Next to Normal and the Regal Theatre continues to host a range of productions.

This made finalising the list quite difficult but here is my Top Ten for 2015:

1. Urinetown (WAAPA)
I adored this show. From the moment it opened the satirical tone had me in its clutches and the ferocious choreography sealed the deal. Outstanding.

"What a thrill to have a show grab you by the throat from the opening moments and not let go until the cast is taking well deserved bows. This is a spectacular production of a very funny and irreverent musical and I have to say, it knocked my socks off."

2. Les Miserables (Crown Theatre)
What more can be said about the fabulous Les Mis? Simon Gleeson and Hayden Tee headline a stellar cast, half of its number including Gleeson having graduated from WAAPA.

"For rousing songs and sheer theatrical spectacle Les Miserables is hard to beat and this production has quality in every department."

3. Legally Blonde (WAAPA)
Such a colourful, energetic and joyous production, this showcased a fabulous graduating class to full effect.

"WAAPA’s mid-year musical theatre production has become a highlight of the Perth theatre calendar as they throw their considerable talent and resources – performers, musicians, set designers, costume designers, production department and many others into crafting a professional level experience both for its students and the audience. The results here, as with last year’s West Side Story, are impressive and wildly entertaining."

4. Next To Normal (Black Swan State Theatre Company)
I finally discovered that there is an orchestra pit at the Heath Ledger Theatre. And that Rachael Beck is a star.

"Next to Normal stands out for the fact that its subject matter is challenging and under-serviced, certainly in musical theatre form. It demands that the acting from the performers is as good, if not better, than the singing requirements. The cast here deliver in spades with a potent mix of excellent songs, a great score, and a fully formed narrative arc for its central character that is as harrowing as it is gut wrenching."

5. Music Theatre Showstoppers (WAAPA)
The cast of Les Miserables doing a concert singing some of their favourite musical theatre songs? This only confirmed that the talent of that cast, top to bottom, is outstanding in a wonderfully entertaining evening.

"Take the cast of Les Miserables, half of whom are WAAPA graduates; their musical director Geoffrey Castles along with four other members of the orchestra; throw in a little star power with event patron Ben Elton; add the enthusiasm and organisational skills of Eponine herself (Kerrie Anne Greenland) and you end up with what can only be described as a spectacular fundraising concert at the Geoff Gibbs Theatre. The sheer magnitude of talent on display was breathtaking."

6. Assassins (Midnite Youth Theatre Company)
Staged in the intimate studio space at the Subiaco Arts Centre I loved the full tilt approach to this most audacious of concepts for a musical.

"What I loved about this production is that all involved attacked it with total commitment and absolute ferocity. There is incredible intensity in the darker hued characters that is matched by some standout comic performances as this rogues’ gallery improbably comes together, ultimately, in a wonderfully written sequence, to convince one of their confreres to commit perhaps the most famous assassination in American history."

7. Sweeney Todd: The Demon Barber of Fleet Street (Fresh Bred Productions)
Another Sondheim and this one was beautifully sung and played at the palatial Joy Shepherd Performing Arts Centre.

"... this is a fine production of a tremendous piece of musical theatre. I understand months of preparation and rehearsal have gone into making this show a reality and it shows. Congratulations to all involved on taking a risk with such a huge undertaking for independent theatre and pulling it off."

8. Point and Shoot: Farewell Show (Holland St Productions)
After touring the production on the eastern seaboard to further acclaim, this farewell show before heading to Brighton was so tightly executed that it couldn't help but make its way to this list.

"It would be fair to say that after witnessing the show for a second time that it is my favourite piece of original content generated out of Perth (in all formats) for quite some time."

"If one of the roles of community theatre is to engage with and entertain its local residents then these productions are among the finest examples we have in the state. Usually a run will only be four to five shows over one weekend but they are always well attended and sit comfortably in the spacious Performing Arts Centre."

10. Spring Awakening (Fresh Bred Productions)
Immediately after the completion of the show I went home and bought the original cast recording which has been on high rotation ever since. An outstanding collection of songs well sung in one of the most surprising adaptations to a rock musical ever.

"Matching the musicians was the vocal talent on display. This really was a strong cast from a singing perspective – the featured vocalists excelled and were given tremendous support from the ensemble."

Not only was Beck's singing excellent, it was her acting that really impressed in Next To Normal. She commanded the stage throughout but worked so well with the rest of the cast to bring a complex arc to life.

Male Performers of the Year - Simon Gleeson
A towering performance in the role of Jean Valjean and his Bring Him Home almost had me in tears. Again. Damn it!

Elethea Sartorelli - Excelled as Mrs Lovett in Sweeney Todd with Cockney accent in place, and a real energy to her performance that threatened to steal the show.

Megan Kozak - A powerhouse turn in Urinetown was matched by an equally impressive performance as Brooke in Legally Blonde.

Jacob Dibb - Another performance from Urinetown that was compelling. Dibb showcased a terrific voice and played Bobby Strong with a straight ahead earnestness that worked so well.

Madeline Crofts - A standout in Spring Awakening as Wendla Bergmann, Crofts also popped up as Johanna in Sweeney Todd and perhaps most impressively gave a hilarious and feisty performance in the original musical How We Ruined MacArthur's Markers.

Kate Thomas - Thomas sank her teeth into the star role of Elle Woods in Legally Blonde. She looked fantastic in Elle's signature outfits and sang beautifully in an assured performance.

That's it for 2015. Hope everyone had a great Christmas and I look forward to seeing you all at the theatre in the new year!
Posted by Richard Hyde at 15:01