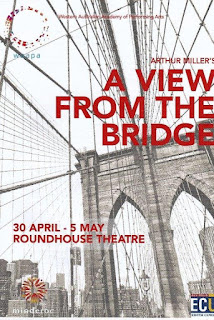 What a stellar year it has been for plays. There were a few shows desperately unlucky not to make the top ten including a couple from WAAPA’s 2nd year acting class which had an excellent 2016.

Another feature is the prominence of one person shows; a couple from Fringe, another at the tail end of The Blue Room’s 2016 season. Black Swan also had a good showing in Kate Cherry’s final year at the helm as did independent company The Last Great Hunt.

There was magic, myth, the deconstruction of male stereotypes, and a brutally authentic exploration of rape culture.

“Rotondella as Eddie gives one of the finest performances I have seen at WAAPA in the last few years. There are so many layers revealed from the forthright, cocksure man’s man who is confident in his position and status to the slow unravelling of that certainty as Eddie’s pre-eminence is questioned by all around him.”

“Powerful, confronting, and deeply moving I was shattered. I apologise to all involved for not staying for the Q&A but it's one of the rare times I had to immediately find space to breathe and think.”

“… a superb exhibition of storytelling and stagecraft.”

“Black Swan’s production is a finely acted and stylish piece of theatre that befits the rightly lauded writing. The first half of this preview flew by in a dazzling 90 minutes. The second half gets a little funky as the hallucinations and visitations become bolder until it all ends in a crescendo that has you wishing Part Two was but a dinner break away.”

“This sumptuously visual and aurally rich production is the first international collaboration for Black Swan in conjunction with The National Theatre of China. Written by German playwright Bertolt Brecht, directed by Dr Wang Xiaoying, and featuring an Australian ensemble it is a fascinating mixture of storytelling styles and culture.”

“Beautifully crafted script, cleverly staged, and supremely acted by Steve Turner. This is the local answer to Thaddeus Phillips' 17 Border Crossings. Both are examples of stellar theatrical storytelling and indeed could be companion pieces.”

“With great skill, imagination, and the power of words you really can create magic under the moonlight.”

“Every year there is always at least one show that turns out to be an unexpected gem. Make no mistake, The Matchmaker by the 2nd year acting students is one of them. Very funny with so many excellent performances this farce truly sparkled.”

Another tour de force one person show this time with Alison van Reeken exploring the murky ethics and personal cost of drone based warfare.

“This is well written and performed with the most impressive aspect being the expert execution of changes in mood as the story deepened and headed in unexpected directions.”

Outstanding in A View From The Bridge with a layered performance that was riveting as he runs the gamut from machismo to gut-wrenching anguish. The slow disintegration of Eddie before our eyes is superbly handled.

Gave an excellent performance as Valium addicted, hallucinating housewife Harper in Angels in America. The second half featured the bravura Antarctica sequence which was a sheer joy of performance and technical execution.

Will McNeill (A Tale of Two Cities)

Brittany Santariga (A View From The Bridge)

Well, that's me done. Have a great Christmas everyone and while I may not be reviewing anymore I'm sure I'll see you around the traps with Fringe fast approaching.