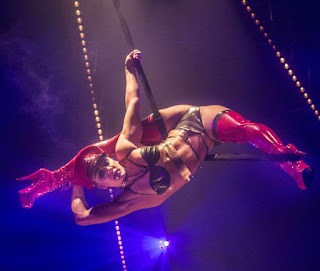 It was an oddly muted year for musicals in 2016. The top end was spectacular as always with WAAPA’s exceptional The Drowsy Chaperone only pipped for top honours by the unstoppable La Soiree road train.

The Academy features in this category as it does every year joined by local independent powerhouse Holland St Productions. Rachael Beck returns after last year’s Next to Normal and Fringe proved to be a reliable source of musical theatre flavoured entertainment.

“In a show of jaw dropping brilliance there was one unmistakeable conclusion – not only is this troupe comprised of superb entertainers but they also count among their number world class athletes.”

“The show ticks all the boxes – gorgeous production values, a witty script, fabulous performances across the board, a fun score, and above all it is consistently laugh out loud funny. At a brisk 100 minutes with no interval it is utterly infectious and a complete triumph.”

“This was a pulsating show that matched the energy of its performers, was a visual feast, and sounded great. In many ways all these elements elevated what is really a paper thin plot and made it compelling.”

“Standout performances by Kelsi Boyden, David Cuny, Tom New, Finn Alexander and Mackenzie Dunn with the band in cracking form under MD Timothy How, especially guitarist Jack Maher and excellent use of my favourite venue in Perth, The Roundhouse Theatre by director Adam Mitchell.”

“Bringing star power and more than a touch of class Downstairs At The Maj, Beck sings beautifully, looks stunning, and exhibits a wonderfully self-deprecating sense of humour and playfulness.”

“… this is a must-see for everybody who has a dream, loves the written word, and enjoys a smart parody of the musical theatre form. Plus hats. If you love hats you'll LOVE this!”

“One signature aspect of any Holland St Productions show is how film literate the driving creative forces, Tyler Jacob Jones and Robert Woods are. It’s tantalising then that a musical comedy is packed with allusions to well-known recent and not-so-recent movies with ‘cameo appearances’ by many a celebrity, most notably Keanu Reeves (Jones), Madonna (Taylor) and a pitch perfect Meryl Streep (Hutchinson).”

“One of the beauties of Impromptunes is that no two shows will ever be alike. It’s the genius of the premise that sees a completely self-contained one hour musical performed every night. Not even the cast know what’s going to happen or even what the topic is going to be.”

“Two immediate thoughts after having a wonderful time this afternoon with this iteration - The Drowsy Chaperone has to be remounted by WAAPA IMMEDIATELY! and the 2016 MT class give the best critique of The Beautiful Game, bar none. Impressive perception amongst the hilarity.”

“… this was a mature and accomplished piece of musical theatre with an excellent score and well delivered songs that had some great moments of genuinely affecting dramatic acting.”

Immediately set the tone as Man in Chair during the opening sequence of The Drowsy Chaperone and gave an immensely warm and entertaining portrayal that powered the show. Amusingly reprised the role narrating Best Bits.

A standout in the wildly uneven Clinton the Musical with a funky and energetic portrayal of the former First Lady. Displayed excellent comedic chops though the last laugh may end up being on us all given recent events.

Andre Drysdale (Sincerely Yours, A New Musical and The Beautiful Game)

Stefanie Caccamo (The Drowsy Chaperone and Bring It On)

Hannah Burridge (Bring It On)

Thank you and good night!