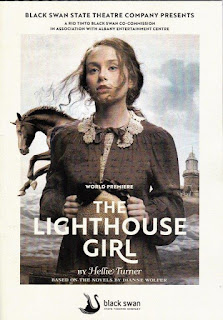 Playwright Hellie Turner revisits familiar territory after 2015's WAYTCo commissioned production of The Dreaming Hill for the 100 year anniversary of the Gallipoli landings.

Daisy Coyle played a nurse in that production and has since appeared as the lead in another of Turner's plays, last year's explosive Project Xan and now as Fay Howe in The Lighthouse Girl.

She is terrific here in a dual coming of age story - that of the eponymous character and of Australia itself as innocence gives way to the 'baptism of fire' on the shores of Gallipoli and the harsh realities of war writ both large and personal.


Just as in Project Xan, Coyle projects a radiant innocence and decency that is compelling. Clearly, writer and actor have gelled creatively and it will be interesting to see what may come in future endeavours.

Coyle is joined by a crack cast of newcomers and stage veterans. The play itself feels very much a throwback to old-fashioned storytelling with its own guileless charms. We know what awaits the troops steaming off to war and portents of doom are therefore flickering beats instead of heavy-handed assaults.

The characters represent aspects of the Australia of its day. Coyle and Murray Dowsett (as the gammy legged Joe Taylor) are innocence personified, the latter with a good willed Ocker sense of humour but with a touch of wisdom as befits the older pre-war generation.

Giuseppe Rotondella and Will McNeill are the larrikin spirit of the young country; two outback tearaways off to see the world and chase adventure as they sign up for war. Their chemistry is excellent, forged over the last three years together at WAAPA.

Then there's Benj D'Addario as the widowed father of Fay and Alex Malone, the older sister of McNeill's Jim Finch. They serve important functions as the voices of concern and reason (in the former's case from hard won experience) which grounds the other two strands.

The ending is well executed as 'growing pains' turn to inevitable tragedy but mostly this is a gentle and good-natured tale driven by an immensely likable central performance.
Posted by Richard Hyde at 23:03