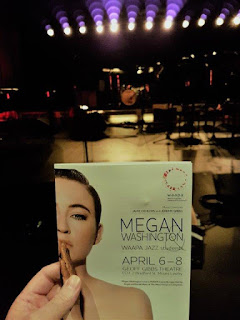 Before we begin we need to clarify a few things.

2) The aforementioned concertgoers, by overwhelming acclamation, were deemed by Megan to be... "lovely". And so we were. We didn't chat during songs or anything!

3) Not being familiar with the two time ARIA winning singer-songwriter - I'm past the age where I know what an ARIA is let alone who wins them - I discovered over the course of the night that she is a major talent with a fabulous, distinctive voice, engaging stage presence, and a knack for writing songs with smart lyrics and surprising origins (I learnt more about the mating habits of gorillas than I perhaps might have expected). She also wields a mean set of hands on the piano.

4) I further discovered she has a sly sense of humour. Yes, I was "that guy" in the front row. What can I say, you made me laugh. You're welcome!

All this, along with the talented jazz students, instrumentally and vocally, added up to an excellent evening of jazz standards and original songs.

I very much liked that there were different combinations used throughout the roster of 15 songs - a big band combo; a vocal ensemble; two separate band ensembles; and her solo moments on piano. Megan allowed us to see a vibrant personality with that sense of humour, off-beat stories about the creation of a couple of songs, and even a joke to stretch for an instrument change. She is a very expressive performer with physical movement and hands aflutter in Cocker-esque style passion.


Highlights included a stunning acapella rendition of Imogen Heap's Hide and Seek; the first solo number Skeleton Key; and first half closer Fisherman's Daughter with Michael Ellis again impressing on guitar after last month's Bebop. The set following the interval took things up another notch with a most unusual ballad; her original composition How to Tame Lions with the Vocal Ensemble adding real oomph; and a smashing Valerie as the vocals soared and Ensemble 2 cranked up the beat with Chris Musitano featuring on trumpet.

As Megan herself remarked, she only arrived in Perth on Monday and to have such excellent musical backing in that short a time frame and from students no less speaks volumes to their talent.
Posted by Richard Hyde at 23:28