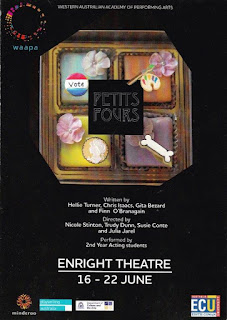 My pick was Remarkable which started off as a pisstake of the egos one might find on a film set (of a hilariously poorly written script) but turned into a most interesting commentary on the depiction of sex, nudity and violence and, critically, the ways male filmmakers pressure actresses into doing their bidding for less than altruistic motives. A fascinating angle emerged around who was portrayed as complicit in this. Unsettling and perceptive.

Good to see so many of the 3rd year MT students in the audience on their night off from 42nd Street supporting their acting colleagues.

*originally published at facebook.com/perththeatrereviews
Posted by Richard Hyde at 18:06