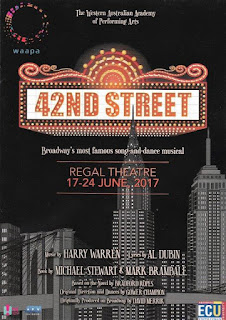 Forty specks of dust on a stage.

Twenty graduating students; another twenty who will be in their place the exact same time next year.

Yes, when "you put all those specks of dust together... you have something alive and beautiful that can reach out to thousands of people..."

And so it proves in this spectacular mid-year production at the Regal Theatre.

There is perhaps nothing more exhilarating at the theatre than witnessing a mass tapdancing routine. I confess I'm sucker for it and here you don't get one, or two, or three, you get several tightly choreographed explosions of movement, colour and straight up, unabashed enthusiasm. It's a joy to watch. Plus this - you will rarely see that number of performers together on stage at the one time outside of this combined flexing of WAAPA's MT muscles.

Sure, the plot even with the 'play within a play' structure is hardly groundbreaking and follows a well trodden path. But who cares? Every set piece is exquisitely staged and performed so the skeleton on which it all hangs is, certainly for me, of secondary concern.

"...you're going out a youngster but you've got to come back a star!"

It's perhaps not so difficult to draw parallels in this statement between the fictional character Peggy Sawyer and the performer who plays her, Mackenzie Dunn. Dunn displays true triple threat talent - singing, dancing, and acting - and like Peggy is destined to have a big future. The other standout for me was Lucy Ross as the bitchy, aging star Dorothy Brock who will be usurped by Peggy. Ross sings exquisitely and is all swagger and attitude to burn.

Others to impress - Tom New as irrepressible Billy Lawlor; Joshua White as the demanding Julian Marsh; Laura Jackson as Maggie Jones; Kelsi Boyden who brings the charisma with her Ann Reilly; the sharp dancing of Luke Haberecht as Andy; and a lanky comic performance by Ben Colley as Bert.

But then everyone is excellent and the dancing is fabulous as is the orchestra.

When I left the theatre there were a couple of teenage girls tapping on the footpath. If I wasn't already smiling that just capped the evening off.

If you don't leave the Regal grinning from ear to ear after this show seek medical attention. Immediately. I'm serious. Go to nearest medical facility NOW.

Highly recommended though I expect tickets will be extremely difficult to get.

*originally published at facebook.com/perththeatrereviews
Posted by Richard Hyde at 18:13